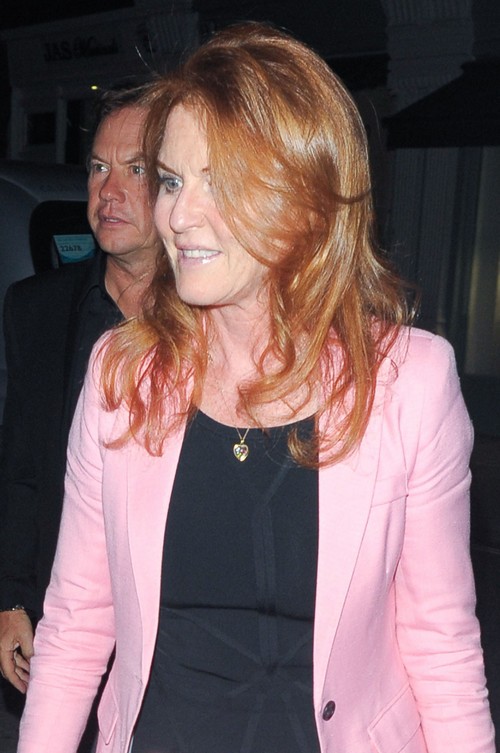 Sarah Ferguson is desperate to remarry Prince Andrew and has stooped to defending the alleged underage sexual abuser to try to win The Duke of York (and his great wealth) back. Sarah ‘Fergie’ Ferguson was never considered particularly media-savvy, and she’s proving that she doesn’t deserve that moniker with her recent remarks to the press. Obviously, everyone’s heard about Prince Andrew’s involvement in that gross underage sex scandal rocking the interweb. They’ve also heard rumors of Fergie’s possible romantic reunion with Prince Andrew, but I think everyone assumed that Fergie would refrain from commenting on the sex scandal if the opportunity came up.

But alas, that’s not what Sarah Ferguson did. Even though a 17-year-old masseuse claimed that she was pimped out by convicted pedophile Jeffrey Epstein to Prince Andrew – multiple times – Sarah is claiming that she’s sticking fully behind her man.

Fergie was cornered by reporters in French ski resort Verbier, and when asked about whether she was supporting Prince Andrew amidst all the allegations, she replied, “The York family is a tight unit. We’ve always been a tight unit. He is the greatest man there is. It was the finest moment of my life in 1986 when I married him. He is a great man, the best in the world.”

Um… I get that Sarah sees herself marrying Prince Andrew again in the future, but pretending as though he’s the ‘best in the world’..? Come on, I don’t think anybody here agrees with that, even before the underage sex scandal came out in the media.

Sarah Ferguson desperately needs a new PR person, or she needs to figure out how to stay silent about topics that she has no wisdom about. There’s little chance that Prince Andrew wasn’t involved with this scandal explicitly, but the fact that his name is connected to it is enough to publicly scar his image for life. And yet, Fergie still wants to remarry him…..

What do you guys think? Is Fergie committing career suicide by supporting Prince Andrew so publicly? Or is she just thinking about how she wants to remarry him in the future? Let us know your thoughts in the comments below.