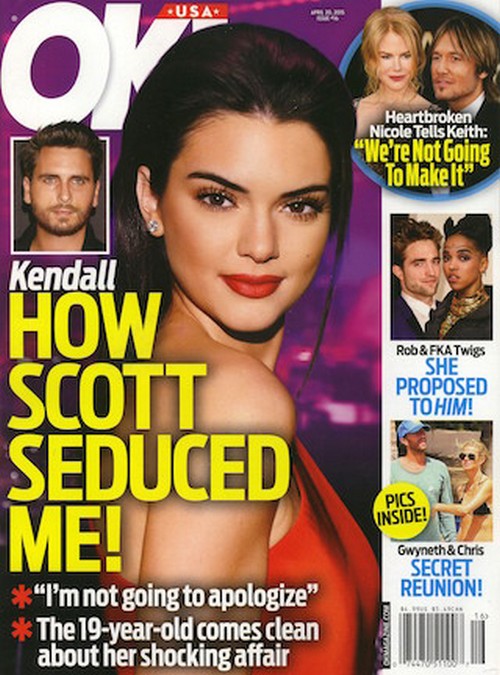 Scott Disick has reportedly been cheating on Kourtney Kardashian with her little sister Kendall Jenner for months now. The tabloids have been pushing Scott and Kendall’s affair incessantly – and they seem determined to make it stick. Nothing really shocks us when it comes to the Kardashian Family these days, if you told us a few years ago that Bruce Jenner was going to get a sex change we would have laughed in your face. So, anything is possible – perhaps Scott Disick really is cheating on Kourtney with her little sister, stranger things have definitely happened in that house.

The April 13th edition of OK! Magazine reveals that Kendall and Scott’s affair began when the Kardashians were in Europe for their week of whirlwind wedding activities when Kim and Kanye were tying the knot. Although Scott and Kendall have always had a “connection,” he even introduced her to vodka and weed, their flirtationship never became physical until that fateful week in Europe. Love was in the air, Scott was drunk, and Kourtney was in bed being pregnant – it’s no wonder they couldn’t control themselves.

OK! Magazine’s insider reveals that Kendall Jenner’s feelings for her future brother-in-law are the real deal. The snitch dished to the tabloid, “Kendall didn’t know that it [in Europe] was the start of something more…but now, even though it has crossed the line, she is telling friends that she has developed strong feelings for Scott and she has no intention of stopping – or apologizing.” The source also went on to say, “Kourtney says she doesn’t have time to worry about it – but in truth she is devastated and humiliated.”
We still aren’t entirely convinced that Kendall Jenner and Scott Disick are having an affair.

It’s totally something Scott would do – but it is hard to envision Kendall Jenner stooping that low. We thought she was supposed to be the one member of the Kardashian Family that had some standards and self-respect. What do you think? Is Scott Disick really cheating on Kourtney Kardashian with her little sister Kendall Jenner? Share your thoughts in the comments below!