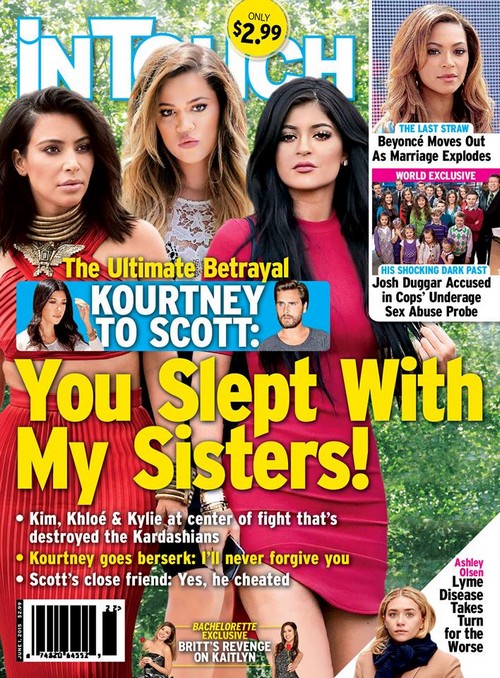 Scott Disick is cheating on Kourtney Kardashian – with her sisters. Plural, as in Scott is sleeping with more than one of the Kardashian-Jenner sisters, according to the latest cover of In Touch Magazine. It’s no secret that Scott cheats on Kourtney, the couple is rumored to have an open relationship, but apparently even Scott’s lenient baby-mama has her limits, and she is furious that he is sleeping with her sisters.

The June 1 cover of In Touch Magazine features a photo of Kourtney Kardashian’s sisters, Kim, Khloe, and Kylie Jenner. The headline screams, “The Ultimate Betrayal: You Slept With My Sisters!” In Touch’s cover goes on to reveal that, “Kim, Khloe, and Kylie are at the center of the fight that has destroyed the Kardashian Family,” and apparently “Kourtney has gone berserk.” Ironically, the cover does not specify which sisters Scott has reportedly been having sex with – we’re going to go out on a limb here and assume it is not Kim seeing as how she is married Kanye West, and has nothing nice to say about Scott.

So, which Kardashian sisters did Scott cheat on Kourtney with? If we had to guess – we would say Khloe Kardashian and Kendall Jenner, who is mysteriously left off the cover. Multiple reports have been surfacing that Kendall and Scott are having an affair, and a few months ago one tabloid even went as far as to say that Scott wanted to marry Kendall. Khloe and Scott are also very close, and have also been rumored to be sleeping together as well. Here’s the thing – the Kardashians hate Scott Disick, and merely tolerate him because he is the father of Kourtney’s three children. It is difficult to imagine them willingly having sex with Scott, especially when they can barely stand to be in the same room as him unless the Keeping Up With The Kardashians cameras are rolling.

Which sisters do you think Scott Disick is sleeping with? Is it Kendall and Khloe? On a scale of 1-10, how insanely ridiculous do you think this story is? Let us know what you think in the comments below!