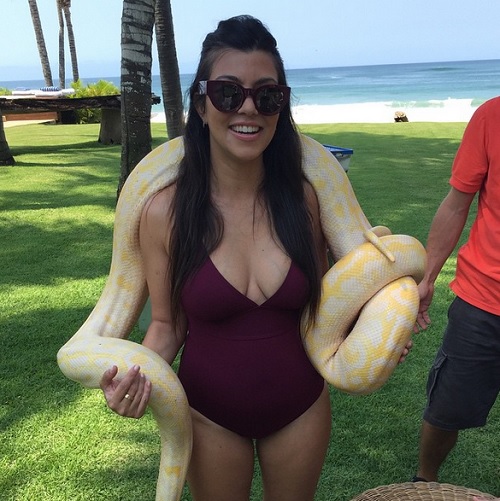 Kourtney Kardashian has faced so many issues with her longtime lover Scott Disick, and now Radar is reporting that Scott Disick has decided to repay her support by criticizing the reality star’s body by calling her fat. Yep, you heard that right! Fat-shamming the mother of his three kids is what we’d expect from Scott.

Scott Disick has always been extremely tough on Kourtney Kardashian and her physical appearance. In the reality show, on which they both star, Keeping Up With The Kardashians, Scott has been seen trying to remind Kourtney of what she looked like before giving birth to their three children. Disick always wants Kourtney to look “perfect,” and wishes she would strive for that perfect body that she had before.

Now, only days after a photos surfaced of Kourtney Kardashian on her vacation with Scott Disick in Mexico, Scott is reminding Kourtney of what she used to look like once again. In the recent photos of Kourtney on the beach in her bathing suit, the reality star is looking a little larger than she looked when she was younger, but that is only expected considering she is currently the mother of three children.

Kourtney Kardashian must have seen the photo because she followed up by posting a picture on her own Instagram account with the caption, “So after a fun vacation, it’s time to get back on track. Need to start back hard core in the gym and start my Lyfe Tea teatox today! Ready for that boost in metabolism!”

An inside source has recently revealed to Radar that Scott Disick does not believe that Kourtney should use the excuse of giving birth to they children, Mason, Penelope, and Reign, as an excuse for gaining weight.

The source says, “Scott is always trying to remind Kourtney of how hot she used to be. It is totally unfair because she had three children that were his doing, and for her to be able to look like she did prior to having the kids is just impossible.” We have to agree with the source. Scott needs to back off and worry about getting his own life under control.

Scott Disick has only been getting worse in the past few months because he is on his own “health kick,” and is finding every reason to be very critical of Kourtney’s body.

“Ever since Scott got on his fake health kick which he just drinks a smoothie and thinks he is healthy he has been extra cruel towards her. The sad thing is that she actually listens to his criticism and goes into a place in her head where she thinks she needs to be a size zero to keep him.”

If Scott Disick really wants to criticize Kourtney so much, maybe it’s time for Kourtney to move on with her life and find a new man. What do you think? Is it acceptable for Scott to so hard on Kourtney even though she has given birth to their three children, or does Kourtney Kardashian need to kick Scott out of her life, once and for good. Let us know in the comments below?