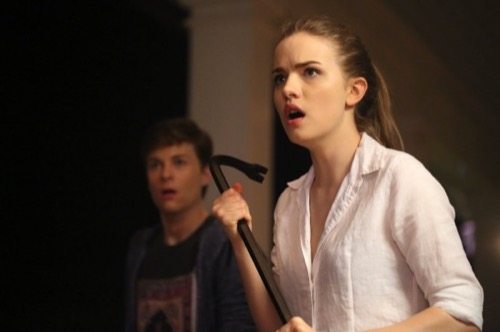 Tonight on MTV Scream airs with an all new Tuesday September 1, season 1 finale called, “Revelations,” and we have your weekly recap below. On tonight’s episode, in the Season 1 finale, Emma (Willa Fitzgerald) tries to save a loved one.

On the last episode, Emma, who doubted that the actual killer had been captured, teamed with Piper to find answers at the Halloween dance. Did you watch the last episode? If you missed last week’s episode we have a full and detailed recap, right here for you.

On tonight’s episode per the MTV synopsis “in the Season 1 finale, Emma tries to save a loved one and also learns the identity of the killer.”

The season finale of Scream is set up for a blood bath.

Continuing from last week’s shocker, the sheriff is still held hostage and its streaming live at the high school. But unfortunately not everyone is that party. There seems to be a group that had gone over to Brooke’s for her unofficially after-party a tad early and that means Brooke and Audrey don’t know about the sheriff.

And on a night like this, it’s also doubly odd for cells phones to be down. People keep trying to text each other yet none of their messages appears to be going through. So Brooke and Audrey can’t reach out to their friends to find out what was the hold-up. And believing that they instead had been stood-up, began drinking to perfect teen excess.

Though the one thing the police don’t need is a bunch of teenagers drinking to the point Brandon James’s mask becomes a funny joke. And everyone just has to wear one.

However, back at the station, there was more pressing concerns. Deputies had been killed and Branson had made a run for it.

So, at first, no one had time for Emma who desperately wanted to talk to her mom. And they were perfectly fine with ignoring her. That is until she said she could help them find the sheriff and that wasting time by pretending she wasn’t involved in all of this.

Therefor Emma was able to tell her mom about the latest message she got from the killer. And the two of them were able to decipher where the sheriff had been taken based on a necklace that they feel Branson must have left behind for them. See, a trinket was found in a dead deputy’s mouth.

And figuring it was planted there not after long Branson must have went on his murderous rampage in order to escape his cell, they then came to understand what the necklace meant. Including its significance to Maggie.

Brandon apparently used to leave presents for Daisy behind her house. It was just something he did a lot. And she’s always took them because she was his friend and never said “no”. But one time he had left a necklace that looked a lot alike the one found in one of the victims.

So the ladies instantly knew they had to return to Maggie’s old house.

But, sadly, all of their efforts was a waste in the end. For this killer appears to hate Maggie with a passion. As in he feels she used Brandon until he no longer had a purpose. So his real purpose it seems was to feed the Duvall ladies enough clues to find the sheriff and then watched as she inadvertently caused Clark Hudson’s death by moving him when she shouldn’t have.

Then, when he knew they were at their lowest, he reached out to Emma again. Only this time he wanted to warn her about talking to the police. Even going as far to say he’d kill everyone at Brooke’s party if she did.

So Emma and Noah went to Brooke’s and they were hoping they could go there and end things once and for all.

Yet they found what was once a raging party deserted. As if everyone had been cleared out in a hurry. And, to be frank, the blood they found on the furniture probably had a lot to do with that.

But there was one problem with this murder mystery – there were far too many people running around just seemingly being innocent parties.

Noah and Emma first ran into Kieran who showed up with a gun of all things. He claimed to have been doing some of his shooting practice to calm down after that Halloween party with Emma took a turn for the worse. Though that doesn’t exactly explain why he was still walking around at Brooke’s.

Although his explanation isn’t as odd as Audrey’s. For Audrey was the one that came face to mask with the killer and only walked away with a scratch on her arm. So that was a bit out there for this killer. He generally doesn’t leave survivors.

And yet Audrey wasn’t the only survivor.

Jake said he had been down at the lake when everyone cleared out so he hadn’t known about what was going. And they found Brooke slowly dying in a freezer. Thus there were a lot of survivors and Noah was simply suspicious of everyone.

But as for Emma, the killer called her down to the lake where Brandon died because they said that’s where they were holding Maggie.

And that’s where Piper was revealed to be their killer!

Piper you see was Emma’s half-sister and she had been pretending to help Emma solve the murders. When what she was really doing was using her “assistance” as a means to get close to the daughter her mother had actually kept. However, while Piper had believed she could kill her mom and sister and frame it on Branson, someone finally deigned to show up with a gun to this knife fight.

And that someone was Audrey. Audrey who is also a pretty good shot but not as good as Emma who was the one that finished off Piper.

So Piper was gone and for a second we were relieved. But remember that incident when Will had pushed Piper out of the way and got stabbed for it. Yes, well, that was humanely impossible for Piper to have done alone. And again it was weird that Noah was the only one that questioned it.

Noah looks to tie everything up yet how it will it feel for him if he ever realizes that Audrey had been working alongside Piper this entire time.

Audrey is his best friend and without her I don’t think he’d even know how to exist in the real world.