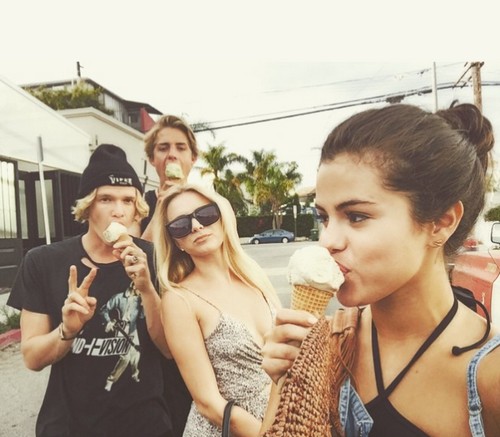 Is Selena Gomez dating Cody Simpson? Last week Selena had the internet buzzing when she stepped out on a date with Ed Sheeran, but it looks like Justin Bieber’s ex-girlfriend is playing the field – because on June 29 SelGo spent the afternoon with Cody Simpson, and the duo appeared pretty cozy when they hung out in Venice and stopped for ice-cream cones with some friends.

Selena Gomez and Cody Simpson dating rumors have popped up before, but they lately gained a lot of momentum when Cody and his longtime girlfriend Gigi Hadid broke up. Their hangout session in Venice on Monday didn’t exactly quiet the rumors, and the fact that Selena shared a photo of herself on Instagram with Cody and gushed that it was “the best day” only egged on fans who were certain they were dating.

Selena Gomez has basically morphed into the female version of Justin Bieber. She has been linked to so many guys over the course of the past month, we’re not even sure if she knows who she is dating anymore. Selena and Cody Simpson are playing with fire though. Cody is famously BFFs with Selena’s ex Justin Bieber. And Selena hangs out with Cody’s ex Gigi Hadid. That’s a hot mess waiting to happen. Ironically, Gigi has already moved on with her bestie Taylor Swift’s ex Joe Jonas. Here’s to hoping none of these kids have herpes, if one of them does then they all do – trying to keep track of their dating merry-go-round is making us dizzy!

Do you think that Selena Gomez and Cody Simpson are really dating, or could they just be trying to make their exes Justin and Gigi jealous? What happened to Ed Sheeran, did Selena drop him already? What guy do you think Selena Gomez should be with? Let us know what you think in the comments below!