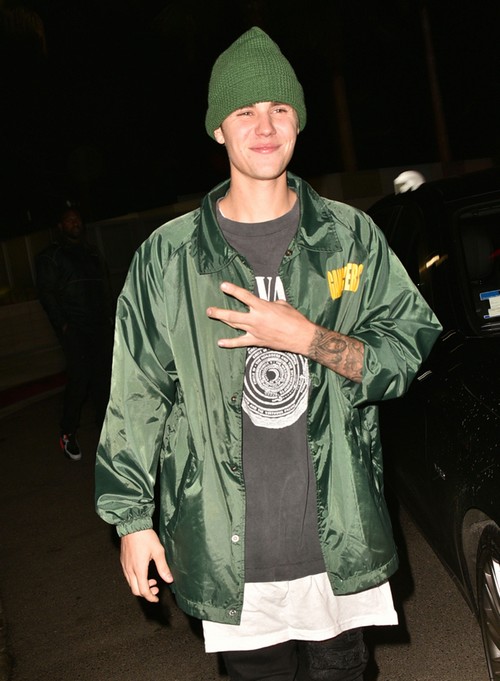 Is Selena Gomez heartbroken after discovering that Justin Bieber partied the night away with Kendall Jenner? The Biebs and Kendall may have shared a hot and steamy kiss at the stroke of midnight to celebrate Jenner turning 20.

Bieber was casually dressed when he arrived on Monday, November 2 at the Hollywood hotspot Nice Guys. Kendall left nothing to the imagination when it came to her birthday attire. The fashion model went braless in a jumpsuit with a sheer top with plunging neckline.

Bieber probably couldn’t resist the dark-haired beauty who was dressed in a sexy black jumpsuit with a sheer top with a plunging neckline.

Even if Kendall Jenner and Justin Bieber did share a kiss at the birthday party SelGo probably has nothing to worry about. Jenner is reportedly hot and heavy with Los Angeles Laker D’Angelo Russell. Kendall has been spotted at a few recent Laker games and to only have eyes for the NBA rookie.

Though sources have said Kendall and D’Angelo Russell are just friends the photos of Kendall enthusiastically cheering on her man say otherwise and neither is denying rumors that they are dating. However, D’Angelo was nowhere in sight at Kendall’s 20th birthday party.

Selena Gomez’s feuds with the Jenner sisters are nothing new. SelGo was furious when she saw photos of Kylie and Bieber cuddling at Coachella weekend in April 2015. Those intimate snapshots ignited rumors that Justin and Kylie enjoyed a summer fling.

Any romance between Kylie and the Biebs was short-lived. The reality television star and 25-year-old rapper Tyga went public with their romance just after Kylie’s 18th birthday.

In interview after interview leading up to the release of “Revival” Selena denied having any romantic feelings left for Justin – but lately SelGo seems to be awfully jealous whenever Justin shows up in public with yet another young woman. Is Justin still in love with Selena? Is the “Strong” singer intentionally trying to make his ex-gal pal jealous by dating young women that rub SelGo the wrong way?

Will this romantic merry-go-round stop anytime soon ending with Justin Bieber and Selena Gomez back together? The pair can’t seem to stop talking about each other but that could just be for publicity. Gomez is promoting her new CD “Revival” and Justin just dropped the third single “I’ll Show You” which is on his new CD “Purpose.”

Kendall Jenner’s 20th birthday party at The Nice Guy nightclub in West Hollywood, California on November 2, 2015. Kendall’s birthday officially started at midnight and many of her close friends and family were with her to celebrate, including Justin Bieber who was fresh off of probation! FameFlynet