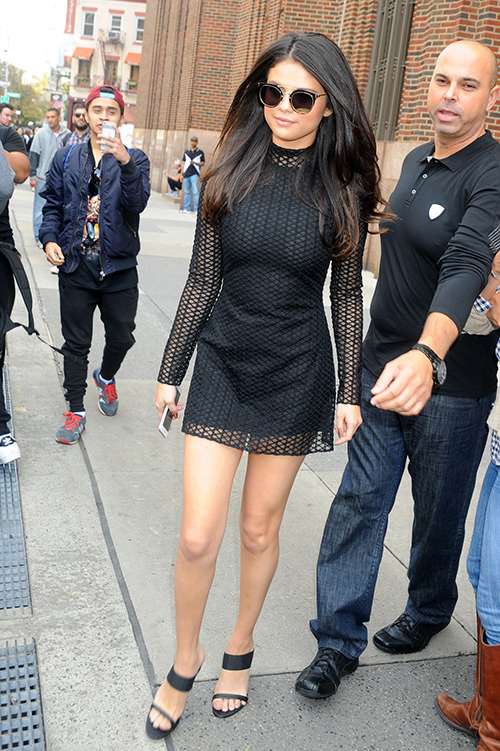 Selena Gomez just released her comeback album, Revival, but it’s looking like the former Disney star may be looking for anything but a career revival. Selena has always had a hard time with fame and it looks like it’s only getting worse. The “Good For You” singer is reportedly really wanting to quit the entertainment business and enjoy a more peaceful life.

According to a brand new report from OK! Magazine, Selena Gomez isn’t as happy-go-lucky as she would like her fans to believe. An OK! source says, “Underneath her spirited facade, Selena is a mess.” The source went on to say, “She cries all the time thinking about all the hypocrisy and backstabbing that comes with the entertainment industry. This album will be her last.” According to the report, Selena only made her newest album because she was under contract to do one more.

That’s sad news for Selena Gomez fans. Especially since “Revival” is getting great reviews and is definitely some of Selena’s best work. The album certainly is her most grown up offering to her fans. Maybe the excitement over Selena’s new album will inspire her to make more music and not let her fans down.

This newest report that Selena Gomez wants to quit music and live a more normal life isn’t that surprising. Ever since her very public break-up with Justin Bieber, the “Come & Get It” singer has been having a really tough time.

In 2013, Selena took some time off to go to rehab and said she was just suffering from exhaustion. It turns out she was actually receiving treatment for Lupus and wanted to keep quiet about her condition. The following year, Selena and Justin broke up, sending the singer into a tailspin. It didn’t help that her two best friends, Kendall and Kylie Jenner, were involved in the break-up drama. Selena reportedly walked in on Kendall and Justin fooling around when the whole group of friends went to Coachella together. That’s why Selena stopped following the Jenner sisters on social media.

In April of this year, Selena took another hit. Gomez posted a sexy swimsuit picture to Instagram while vacationing in Mexico. Immediately, Selena started receiving comments about how much weight she had gained. Selena did look a lot curvier than she normally does but she certainly didn’t look bad. The negative press took a toll on Selena Gomez though and now she’s ready to walk away from fame and fortune altogether.

Selena Gomez seems like a nice girl and that’s why all the criticism gets to her. There certainly is a lot of backstabbing going on in Hollywood. Staying famous and becoming more famous than others is competitive and a lot of women who make it in the entertainment business are successful because they are ruthless. Selena Gomez is not ruthless and maybe she should wrap it up after this album and head for somewhere quieter.