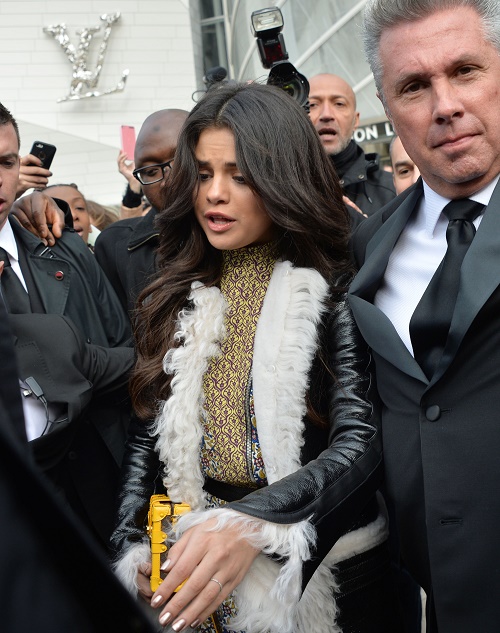 Is Selena Gomez getting married? Selena was photographed on March 11th wearing what appears to be a diamond ring on her left hand – and immediately spurred rumors that she was engaged. But to whom? Selena Gomez has been dating her “I Want You TO Know” music video co-star Zedd for a few months now, although we still aren’t entirely convinced that it is not just a showmance to sell their new single. But Selena’s engagement ring mysteriously popped up the same week that she was in Paris, and allegedly having a super secret meeting with Justin Bieber.

Is Selena Gomez engaged to Justin Bieber or DJ Zedd? Or did the singer just happen to wear a diamond ring on her wedding band finger? The odds of Selena Gomez getting married to Zedd or Biebs right now are slim to none. She and Justin Bieber are still at odds over her romance with Zedd. And Selena and Zedd just had a major fight over the fact that she is still in contact with Justin Bieber. So, if we had to speculate – we’d say Selena Gomez is casually flaunting what appears to be an engagement ring to make either Zedd or Justin jealous.

Selena Gomez is known to use the media to spark up drama in her relationships, and wearing a faux engagement ring to make one of the guys in her life jealous is a typical Selena move. The question isn’t who is Selena engaged to? It’s more like, which guy is she trying to make jealous by pretending to be engaged? Our money is on Justin Bieber. It’s no secret that Selena is still in love with her former boyfriend of three years, and she knows that Justin is furious about her relationship with Zedd. Perhaps a fake engagement will give Justin the extra push he needs, and send him crawling back to SelGo.

What do you think about Selena’s engagement ring? Are Selena Gomez & Zedd engaged? Or is she wearing the ring to make one of them (ahem, Justin Bieber) jealous? Share your thoughts and theories in the comment section below!