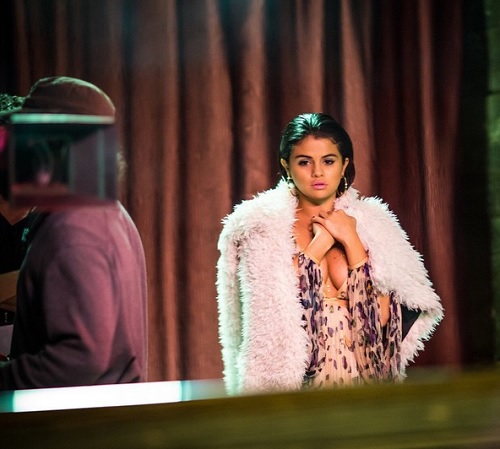 Selena Gomez has called Justin Bieber’s Naomi Campbell bluff, and raised him a sexy photo of her cleavage in her new music video “I Want You To Know” with her boyfriend Zedd, just to remind Justin of what he lost. Selena Gomez and Zedd has been flaunting their relationship all over social media in nauseatingly cute pictures with each other. Although Selena Gomez seems truly happy, it is becoming pretty obvious that she is determined to rub her new relationship in her ex-boyfriend Justin Bieber’s face.

Justin Bieber is determined to get Selena back – not because he wants her back, but because her new relationship with Zedd is seriously deflating his ridiculous ego and nobody enjoys being publicly dumped and replaced. Justin kicked off his campaign to win Selena Gomez back with a sappy apology video vowing to turn over a new leaf. When that didn’t work, he moved on to phase two, “Operation Make Selena Jealous.” On Valentine’s Day while Selena was doing gag-worthy cute things with her boyfriend Zedd, Justin Bieber went out on a date with supermodel Naomi Campbell to New York Fashion Week and was even photographed holding hand with her.

Selena Gomez is staying strong though – and even Justin hooking up with a supermodel (who is old enough to be his mother) isn’t enough to make her go running back to him. Instead Selena hit Justin where it hurt and released some hot photographs from the music video she has been working on with her boyfriend Zedd. Translation? “I don’t care who you were with on Valentine’s Day Biebs, because my cleavage and I were with my new boyfriend Zedd.”

In the still from the “I Want You To Know” music video that Selena leaked on Instagram, the singer dons a retro fur coat, sleeked back hair, and a dress with a neckline that plunges so low you can nearly see her bellybutton. If Justin Bieber didn’t miss Selena before – he certainly does now. Zedd and Selena’s music video is set to be released on February 22nd. Do you think that Justin hooked up with Naomi to try and make Selena jealous? Is it working? Or are she and Zedd in it for the long haul? Let us know what you think in the comments below.

Update: Webloid Gossip Cop is copying CDL’s material yet again and trying to pretend that they know the true motives of Selena Gomez when they are so clearly out of touch. The boring outlet confuses taking a picture with a celeb with understanding that individual. Our interpretation is that much of Selena’s behavior is motivated by her long and largely painful relationship with Justin Bieber – this is really a no-brainer for anyone who pays attention to celeb news and can think.  Of course GC prefers to bluster and bully since actual analysis is so obviously not their forte.