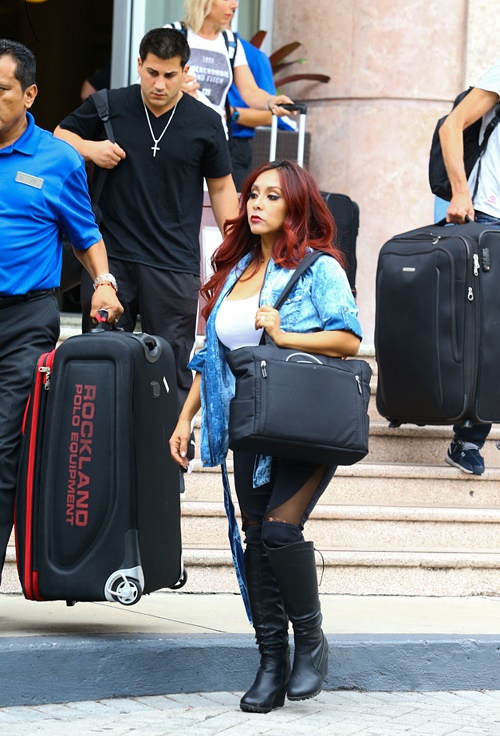 Jersey Shore alums Nicole Polizzi and her new hubby, Jionni LaValle, were just married and said “I Do” in November 2014 – but the couple is already enduring their first cheating scandal and rumor has it that they could be getting a divorce before the ink even dries on their marriage license. Apparently, while Snooki is home taking care of the babies, her hubby Jionni likes to go play…with other women, in Florida.

According to the January 19th edition of InTouch Magazine, Jionni was trying desperately to cheat on his baby-mama and new wife with a girl named Alexa Waldman while he was in Florida. Alexa described in detail how she met Snooki’s hubby, and how he tried to hook up with her. According to Alexa, “We were dancing together and flirting, and then he asked me for my number. Jionni didn’t act like he was getting married. He definitely acted single. As soon as we left the club, he started texting me, asking me to come back to the boat they were partying on. I didn’t. It was clear he wanted more. The next night, I met up with Jionni and his friends for dinner. He told me he wanted to have a girl down here on the side that he could visit. Afterward, he kept texting me and asking me to come back to his hotel room, but I didn’t reply.”

According to Jionni’s almost mistress, Alexa Waldman, they met in 2014 when Jionni was celebrating his birthday down in Fort Lauderdale – and Snooki was clearly nowhere in sight. Jionni and Snooki are really good at keeping their dirty laundry out of the public eye, leading a lot of their followers to assume they are a perfectly happy couple, but we are going to have to believe Miss Alexa Waldman from Florida on this one. Why would Alexa tell In Touch her real name, and let them use a real photograph of her – if she was lying? Any moment the magazine, Snookie, or Jionni could ask to see the text messages to prove it – and obviously Alexa can deliver those or else she wouldn’t have let In Touch plaster her face all over the magazine and make a fool of her if she were lying.

Do you think Jionni cheated on Snooki or attempted to? Is it okay because it was his birthday weekend and he was obviously drunk? Could the newlyweds break up over this? Let us know what you think in the comments below!