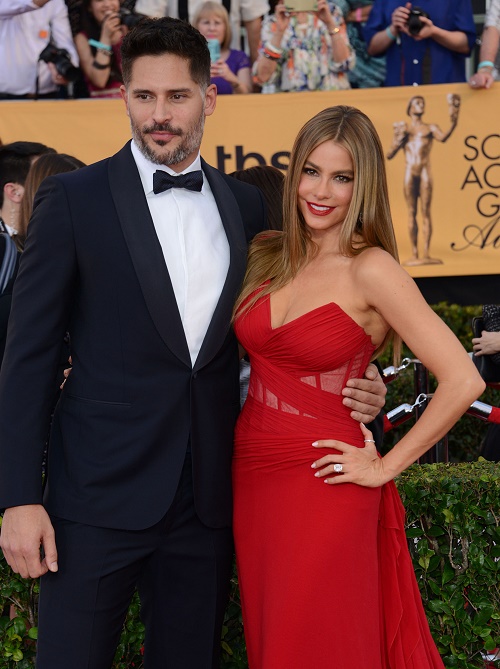 According to the February 16th edition of OK! Magazine, Sofia and Joe have a baby on the way! OK! explains, “Onlookers were buzzing when Sofia Vergara and Joe Manganiello stepped on to the red carpet at the Screen Actor’s Guild Awards on January 25th, the 42-year-old Modern Family star was sporting a fire-engine red dress that hugged all of her curves – including a noticeable bump in her midsection.”

It’s no secret that Sofia Vergara was interested in having another baby; her son from a previous marriage is now an adult himself. She expressed her interest in interviews in the past and has even been open about having her eggs frozen. Sources close to the couple are certain that Sofia’s wish has finally come true – and she is pregnant with her fiancé Joe’s baby. One source told OK! that at the SAG Awards Joe was very protective of Sofia, and was even spotted at times putting his hand on her belly. If that doesn’t sound like a soon-to-be daddy, then we don’t know what does! On the red carpet, Sofia even gushed about her wedding plans, which sounds like it will be sooner rather than later. If Sofia is pregnant, then that explains her and Joe’s sudden rush to get down the aisle.

So do you think that Sofia Vergara is really pregnant? Will she and Joe get married before the baby arrives? Do you think she conceived naturally, or was this a planned pregnancy made possible via her frozen eggs? Let us know what you think in the comments below!