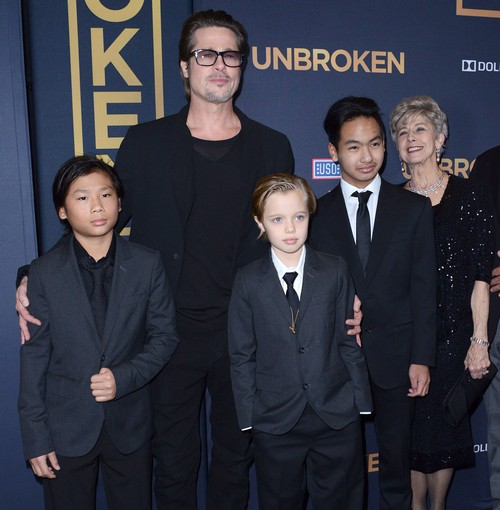 Suri Cruise has a new bestie – Angelina Jolie and Brad Pitt’s daughter Shiloh. Apparently the Hollywood kids met each other at the Kids’ Choice Awards on March 28th and totally hit it off! Sure, Suri and Shiloh have a lot in common – they can bond over their famous parents and misadventures with the paparazzi. But, aside from the fact that they were born into Hollywood, Suri Cruise and Shiloh Jolie-Pitt are polar opposites.

The April 20th edition of Star Magazine reveals, “At the Kids’ Choice Awards on March 28th Angelina Jolie’s daughter Shiloh, 8, made a new bestie in Katie Holmes’s glamour girl Suri, also 8.” An insider dished to Star, “Suri was shy at first but Shiloh is really outgoing – during a commercial she began talking to Suri and they became instant friends. It was adorable. Even their famous moms ended up hitting it off. They seemed happy that their kids were getting along. They talked about setting up a get-together for the girls and exchanged numbers.”

Angelina and Brad’s daughter Shiloh has been a mainstay in the media because of her eccentric appearance, since the 8 year old was big enough to walk on her own two feet she has been rocking a short hair-do and wearing boys’ clothes. Shiloh has been at the butt of many heated transgender discussions regarding children – and her parents’ role in her appearance. Even celebrity transgender Chaz Bono sounded off on the controversial topic and stated publicly that Shiloh was clearly having issues associating with one gender. So, it seems a little strange that Shiloh and Suri Cruise would be so attracted to each other – seeing as how Suri Cruise has been wearing make-up and high heels since she was old enough to walk. What do you think about Suri Cruise and Shiloh hanging out? Let us know what you think in the comments below!