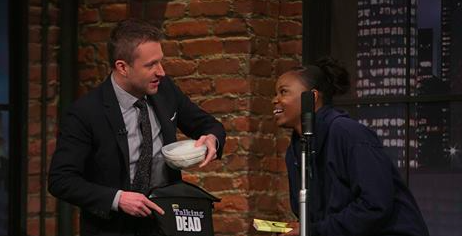 Tonight on AMC Talking Dead returns with an all new Sunday November 8, season 6 episode 5 and we have your weekly recap below. On tonight’s episode, the “Now” episode of “The Walking Dead” is discussed.

On the last episode Talking Dead host Chris Hardwick sat down with Frozen’s Josh Gad to discuss the episode “Here’s Not Here” from The Walking Dead. Did you watch the last episode? If you missed it, we have a full and detailed recap right here for you.

#TalkingDead starts with talk about kisses – Rick and Jessie plus Denise and Tara. Zachary Levi and Alexandra Breckenridge (aka Jessie) are on the show. Chris asks Alex about the kiss with Rick and says it’s been brewing a while. She says it’s Rick and everyone loves him but she’s worried the fans would hate her. Chris says he’s surprised there’s not more sex in the apocalypse then asks what was going through Jessie’s mind when Rick gets into her business.

She says she doesn’t know if he was thinking he was going to kiss her or it was just a moment. Chris jokes about Rick killing her hubby then kissing her. Alex says Rick was showing her that there is more like she was asking about. Alex says scenes like that are not romantic and says it’s like a lip handshake. She says there’s tons of people around and it’s strange. She says the sound department started playing “Let’s Get it On” after the scene ended.

Chris says this show is so intense so breaking the tension is necessary for the cast. Alex says there’s still tension and Chris says he thought Ron would see and flip out. Zachary says they all knew this would happen and says it happened now because Alex finally understands Rick now they can see how the world really is. Zachary says Rick was losing it when they got there and he needed to earn some good will in Alexandria.

Zachary says he wondered if they lost Rick when they showed up. Chris jokes about seeing the softer side of Rick and asks what the future holds. Zachary says Rick has beaten death so many times that running from the herd was not the impetus. He says he thinks Rick just went in to talk to her then he took cues from her and got the green light from her. Now it’s the In Memoriam – included are the sewer sludge walkers, Betsy who had turned walker, and the wolf walker Deanna went nuts on.

They comment in the closing card that Deanna didn’t know you need to aim for the head. Chris reads some comments about Jessie saying they liked that she killed the neighbor walker and approval that she seems to get it. Alex says Jessie’s speech will work better than Rick since most of the locals think he’s unhinged and crazy. Chris says the others seem like they all just came back from Pottery Barn and were out of touch. Zachary says drunk Spencer was harsh on his mom blaming her for all of it.

He says alcohol can be a truth Spencer and says he really thinks that and says a lot of them have had revelations that they were being incubated and those that came to the town are heroes. Zachary says it was hard since Deanna has lost it right now. Alex says Deanna didn’t know what she was doing and didn’t know sheltering them was so detrimental. Zachary says he liked the pantry scene and says he likes when characters are being honorable. He says Spencer was keeping them in check without being a dick.

He says it was sad later that he stole other stuff but you understand it. He says it was drunken logic. Alex says she would steal chocolate or cookie and whiskey. Zachary says he would go for the booze and some carbs to sop it up. Chris asks how long can Rick keep control of Alexandria with all these forces at play. Zachary says he has faith in Rick and says he has pivotal Alexandrians on his side. He says he wanted Rick to ask her to co-lead but he didn’t. He says them together would be better.

Now it’s the live quiz. Results at the end of this post.

Question #2 Which crop is not written on the town blueprint? Soybeans, corn or alfalfa?

Question #3 Who was the walker that attacked Deanna? A wolf, Alexandrian, or a termite.

Producer Denise Huth says she loved this episode and says Lauren Cohan has been in this situation with Glenn before like after the prison when they got separated but then this time she realized she can’t go help and do this because of her pregnancy. Denise says this is a moment of growth for Maggie to look beyond her own needs. Chris reads some web comments including “baby bomb” and other comments about Maggie’s pregnancy reveal.

Zachary says this represents hope that life continues and he likes that she didn’t go because of the baby. He says he’s not convinced that Glenn is dead. Alex asks how he could be alive and Zachary says Nicholas was on top of him and it could have been his blood and guts. Chris says he doesn’t know either. Alex says Jessie has a mess with Sam and Ron right now and has low parenting skills right now. She says Jessie is trying to be strong to defend her family.

She says Ron is off and pissed and is mad she’s friends with Rick. She says Sam won’t come down and she gets that. She says Sam saw her covered in blood and she’s devastated for Sam and doesn’t know what to do. Chris says he thinks she’s being a great mom – she put Betsy out of her misery then made cookies. Then there’s a poll – which of Jessie kids would you be like in the apocalypse. Angry Ron or scared Sam. Zachary says he’d be angry Ron. Jessie agrees. The poll is majority Rob at 77%.

Chris talks about the slap fight between Ron and Carl. Zachary and Chris demonstrate. The next three weeks, Talking Dead will be on at 11 after Into the Badlands which will air at 10. Now a look at behind the scenes of tonight’s episode. The crew nicknamed the sewer walkers sludge walkers and the script had two Alexandrians who had been exiled and were trying to get back in as two of the walkers. Betsy who killed herself was the one that David wrote the note to but then it never made it back to her.

When Glenn left, he hinted that Maggie shouldn’t go because of some reason which turned out to be her pregnancy. We see Aaron portrayer Ross Marquand talking about the Maggie pregnancy reveal and how it weighs on them because it’s tough to have a child in this place and Glenn is missing. He says Aaron got that and said they can deal with it inside the walls but he’s grateful she shared the secret with him.

Zachary says Maggie sees Aaron is an extra risk and that’s why she didn’t want him to go along. Chris talks about how Maggie just needs to know if he’s alive or dead. The next poll is – should Maggie go after Glenn? Yes, go find out or no, stay safe for the baby. Zachary says for the show, he was surprised since characters do things that aren’t what they should. He says she did what he thought she should – recognize it as a suicide mission. 79% of watchers agree she should not have gone.

Chris then says he doesn’t trust Ron then asks why he’s tattling to Rick then asking to touch the gun. Alex says she does think he wants Rick to learn how to shoot the gun. She says Ron takes after his father a little bit. Chris says they can see Pete in Ron in his anger issues. Zachary says teaching Ron to use the gun is not great but Rick is giving the kid the benefit of the doubt. Rick knows they need every person armed and protecting themselves plus Rick likes Jessie so he needs to bond with Ron.

Zachary says at least Rick was smart enough to take the bullets out of the gun. He says Ron might be a red herring. Chris then says we get a behind the scenes look at tonight’s episode for the special effects. We see them shooting in the sewers. They built a large sewer tunnel and then mucked it up. Greg Nicotero says they’ve been showing more raw organs and bone and says they built ribs and hollowed it out to show they are much more skeletal than other walkers we’ve seen.

Chris says to follow Greg Nicotero’s Instagram for lots of great behind the scenes photos. A fan in the audience has a question for Alex and asks what Jessie thinks about Rick’s not burying killers behind the walls policy. Alex says she understands it by right now, they’re surrounded and she doesn’t want rotting bodies left lying. Chris hands her a metal milk crate full of groceries and a broken bottle and also gives her a blueprint from the show that Deanna wrote on.

Zachary asks what the Latin meant and he says it’s from Ovid and means something like the pains of today will be useful someday. Zachary says it wasn’t Latin for the barley goes over there. Chris says he took Latin for four years in high school and didn’t date a lot. Then he brings up the Denise and Tara kiss and says he loved that people who thought Denise was there for Eugene will be disappointed. Zachary says he loved that Denise was telling her it’s not the end of the world.

The next poll question is what is the worst recreational activity in Alexandria? Slap fighting, pantry raid or sewer spelunking. The poll was 60% sewer spelunking. The sneak peek at next week includes Darryl on the motorcycle riding along. He is in a burned out area and then falls over off his bike exhausted. His elbow is bleeding. He hears a noise and turns startled. Is it a crispy walker. Chris says he’s bleeding and they wonder what’s up. Alex can’t say anything.

Chris brings up the bleeding wall at the end. Zachary says their blood is going through the rivet holes since they’re being mushed. He says unless it’s acidic alien blood it’s not that ominous. There’s a twitter question asking if Alexandria is safe right now. Alex says no not at all because of all the walkers.

Quiz Answers – –
Answer #1 20 deep – Maggie and Aaron used the sewer because 20 walkers deep is about 16 feet from the walls.

Answer #2 Soybeans – Make sure to use heirloom seeds in the apocalypse so they regrow each season. Hybrid seeds only grow for one season.

Answer #3 A wolf – the wolf was wounded by Carol in JSS episode and crawled under the house to die.