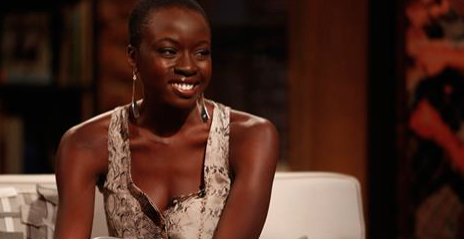 Tonight on AMC Talking Dead returns with an all new Sunday February 22, season 5 episode 11 and we have our weekly recap below. On tonight’s episode, the “The Distance” episode is discussed with guest stars Danai Gurira and Paul Feig.

On the last episode, joining host Chris Hardwick were Lauren Cohan, Tyler James Williams and Robin Lord Taylor. Did you watch the last episode? If you missed it, we have a full and detailed recap right here for you.

Tonight on Talking Dead as per the AMC synopsis, “joining host Chris Hardwick is Danai Gurira and Paul Feig.”

Talking Dead airs tonight, at 10 PM ET on AMC after The Walking Dead. While you wait for the recap, Celeb Dirty Laundry offers a live recap of tonight’s The Walking Dead Season 5 Episode 9 “The Distance” right here!

On #TalkingDead, director Paul Feig and Michonne portrayer Danai Gurira join Chris Hardwick. Danai says Michonne has evolved tremendously over the seasons. She says Michonne had a lot of PTSD and has worked through a lot of her issues. Chris says he likes seeing Michonne challenge Rick in front of everyone. Danai says she never need to before since she’s always supported Rick. She says it was an interesting episode to shoot.

Paul Feig says this episode shows how good the writing and acting are in showing how hard it is to know who to trust. Paul says it was a great episode for the ladies who were the voices of reason. Paul says he sides with Rick since he has two kids he’s looking out for. Chris says it was interesting to see how it played out and Paul says you can’t fault Rick for not trusting Aaron at first. He says if Rick comes at you like that, you know you’re going to get punched.

Chris asks a poll question – should Rick have punched Eric? Paul says it showed Aaron who’s boss. The poll has 63% approval for the punch in the face. Paul says the show inspires him and says it’s always about gauntlet running and he wants to bring that element to his all-female Ghostbusters reboot. Chris asks for a part in the movie. It’s time for the In Memoriam salute to those who died.

We see Michonne picking body parts out of the grill and the quote “And you thought changing your oil was messy.” We see Andrew Lincoln chatting about the episode in a taped interview. He says the dynamic between Rick and Michonne is an interesting journey. He says she’s a viable voice and says it’s a pivotal moment when she pushes back on him. He says there’s a deep respect and tenderness between them. He says Rick trying to control the uncontrollable is what has kept them safe.

Andrew says hearing the sound of the children playing was the only thing that would get Rick through those gates. Chris calls this episode the “screw the Oscars special.” He reads some tweets about Michonne being a bad ass. Then someone mentions a Rick-chonne romance. Chris asks what would have happened if they hadn’t heard the children’s voices. Danai says Rick needed something because he’s come so close to losing his children before.

Chris says it could be Woodbury or Terminus and he gets Rick’s perspective. Chris asks about Michonne’s “the fight is over line.” She says she and Rick can usually communicate without a word. She says she’s seeing Rick get really dark like she used to be. She says Rick is using his wounds to define future experiences. Chris says strength is more than lopping people’s heads off and says it’s also about listening and being an ambassador.

Paul says Michonne wants Rick to keep his humanity. Chris says Glenn mentioned that he wanted to trust people again. Chris says the Ricktatorship doesn’t stop and ask for directions. Paul says the zombie drive by was incredible and it was horrifying how bloody the window got.

Chris then goes to questions from the internet and asks if Michonne would leave Rick’s group for the promise of sanctuary. Danai says no and that she’s with the group and loves them. Paul says Michonne would convince them to come with her. Danai says they are in dire straits as a group. Paul is asked how the best way to approach the Grimes Gang would be. Paul says jokes won’t work and says there is no good way. He says too friendly will get you punched. Bad ass won’t go well either.

Chris says Aaron did the best he could have by taking the punch after the comedy failed. Now it’s time for the quiz (see answers at the end of the post).

#2 How many cans of S’getti rings did Abraham says Rex ate? Two, four or six.

#3 The license plate that Eric gave Aaron was from what state? Indiana, Idaho or Illinois.

Ross Marquand (Aaron) talks about being a fan of the show for all of the seasons and says to get to meet the actors was insane. He says he tried to push down the anxiety of working with them when he was also a fan.

Chris says Aaron is known for doing impressions and asks Danai about this. She says he has a policy not to do impressions of anyone he works with. Paul says he wants to hear his Daryl. Paul asks Chris to do his Alf impression and Chris says he liked the nod to Dale in the RV scene with the battery. Paul says it was sweet and choked him up because you miss Dale. Chris says they’ve lost so many people over the seasons. Danai says those call back moments resonate.

Chris asks why Michonne waits until they’re in the car when she asks the three questions. Danai says the photos didn’t look right and made her think he was lying. She says it’s all on Michonne if it goes wrong. Paul says the push and pull aspect of the episode was great. Chris says then they were in a zombie carwash. They take a call who asks about the most important resource aside from people. Paul says zombie antidote. Danai says a real scientist.

Another question asks if Michonne is losing her edge or looking for normalcy. Danai says neither, she’s evolving and allowing more facets of herself to manifest. Chris says it’s time for inside info from the episode.

Aaron’s character first appeared in issue 67 of the comics. Portrayer Ross Marquand says he tracked the group for two or three weeks before approaching them.

Many of the car scenes were shot inside with a project background so they could better control the zombie guts.

Andrew Lincoln says Rick feels immense relief when he hears children playing inside the walls. He says it’s like being able to breathe again after holding his breath for two years.

Andrew Lincoln says the cool thing about the world is that no one gives a crap about Eric and Aaron being gay since it’s okay as long as you have someone to love. He says it’s beautiful.

Chris reads tweets about Aaron and Eric hoping they’re not evil and another saying Eric is so clean cut is because he’s gay. Chris says when he gave him the license plate, it was so sweet. Chris says it made you want to trust Eric and Aaron. Then he says Rick started to see them as human. Paul says the show is terrifying because you never know what people that seem nice are going to do.

A member of the audience comes up with a question for Danai. He asks about Carol and Michonne’s conflicting viewpoints going into Alexandria. She says it’s exciting but Michonne understands Rick’s caution. She says Carol wouldn’t have pushed that moment forward. She says they are strong and assertive women. Chris hands him some applesauce and feeds him a bite. Chris then feeds him another bite when he says it’s good.

Paul says now the guy won’t cry. Chris brings the guy back over to sit on the arm of his chair. Chris asks Paul about Glenn’s shoot-first orders. Paul says it was like he was trying to be Rick. Chris says they’ll have a look at the special effects of the show next then goes back to feeding the guy applesauce.

The night scene in the woods is explained. They have a stunt guy playing the flare walker then they bring in a dummy with a road flare inside it. They added some sparks to the flare. Glenn says it took a confluence of all the departments to make it work. Chris asks another poll question about viewers’ favorite Michonne moment – Samurai action, crazy cheese or governor fight. Views go with Samurai at 54% and governor fight second at 27%.

Danai says they are a humane group that has done amazing things by taking in the crazy lady with a sword. Paul says he loved seeing DC in the distance and says it gave you hope even though it’s probably covered in zombies. He says the season started fairly hopeless in the second half and now he’s cautiously excited. Danai wrote a play and has Ross in it. She says it finished its run last night. Chris has a question for Danai about if she has a name for her katana. Danai says it’s between she and her.

Chris asks Danai who Michonne is closest to now. She says Carl and Rick. Then he asks if she’s a mom or a sister to Carl. She says all that. Paul is asked about the most shocking moment this season. He says the dog thing traumatized it. Chris says the dogs were dicks and had it coming. Paul says he finally got his wife to watch the show and then it totally turned it off. Chris says he loves dogs and it was hard to watch too.

Chris takes a call who asks who in the group they would clone and why. Paul says he would clone Michonne since she’s a great fighter. Danai says that’s impossible and says a second one of all of them would be great. She says two Michonnes might not always get along. Chris says the audience all get a Michonne sling bag. He shows it off. He demonstrates how you can put your applesauce in the bag. Next it’s the sneak peek at next week’s Walking Dead.

Chris mentions the dance troupe and says the viewers voted for a Rick vs Daryl dance off. The preview of next week shows them in Alexandria. The gate closes behind them. They are asked to turn over their weapons. Aaron says it’s fine and they should talk to Deanna first since she knows the place. A walker comes close to the gate and Sasha coolly puts one in its head, dropping it.

Paul says he hopes Deanna is a leader of the group then says the children might have been just veal for the people. Chris says Rick with a gun in one hand and the baby in the other is terrifying. Danai says playing Michonne has helped her grow personally. Chris reads a viewer question asking about funny bloopers on set. Danai says her dog is a rescue who has behavioral issues. She says her dog hangs out with the animal trainer. She says they were using her dog to wrangle the rabbit. That’s it! Quiz answers below.