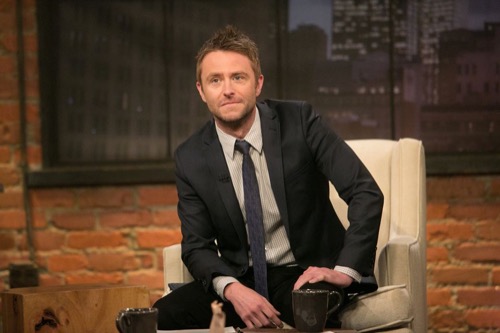 Tonight on AMC Talking Dead returns with an all new Sunday February 8, season 5 episode 9 mid-season premiere and we have your weekly recap below. On tonight’s episode, the “What Happened and What’s Going On,” episode is discussed with guest stars Greg Nicotero, Ron Perlman and Surprise Cast Member.

Tonight on Talking Dead as per the AMC synopsis, “joining host Chris Hardwick this week will be The Walking Dead’s Executive Producer Greg Nicotero and a surprise The Walking Dead cast member. They’ll be taking questions live during the broadcast.”

Talking Dead airs tonight, at 11:15 PM ET on AMC after Better Call Saul. While you wait for the recap, Celeb Dirty Laundry offers a live recap of tonight’s The Walking Dead Season 5 Episode 9 “What Happened and What’s Going On,” right here!

It’s time for #TalkingDead. Tonight Chris Hardwick has Tyreese (Chad Coleman) and Greg Nicotero, who directed tonight’s episode, with him. He asks what is happening with Beth and now this. Chris invites tweets and calls then gets started. He says a lot of tweets are coming in about Tyreese. Chris says people are real upset that Tyreese died and one tweet says his hammer is as iconic as Thor’s. Another says tonight was like a Tyreese acid trip.

Chris says this was the most in-depth character death they’ve seen. Chad says it was a love song and homage to Tyreese. He says Scott Gimple loves this character and that Greg knocked it out of the park with his directing. He calls it a crushing love story. Chris says it was like an art film then asks if Tyreese was at peace at the end. Chad says Tyreese was exhaustedly at peace. Greg says they talked through the script with Chad and he agreed that he’d done all he could do.

Greg says Bob, the girls and Beth were welcoming him to come with them. Chad says he fought hard to live but it just overwhelmed him. Chris says he was on the fence and you can’t be on the fence in that world. Chad says Tyreese was noble when he chose to continue on and tried to hang onto his humanity. He says Tyreese was a fatal optimist. Greg says they had an opportunity to do a Terrence Malick kind of thing. Says each visual image were things that Tyreese experienced on his journey.

Greg says this was like a jigsaw puzzle with images and cast from different seasons they had to get back together. Greg says they wanted the audience to think the funeral was Beth’s and that Tyreese was going to actually make it. Chris asks Chad about them carrying him. He says they were mad to have to carry him since he’s so heavy. He says they dropped him and tripped over stuff.

Chad says they took a big spill coming out of the house. Chris says they almost killed him on the way to his big death and Greg jokes and says they actually killed Tyreese dropping him. Chris does the In Memorium to front porch walkers, gate crashing walkers, Noah’s brother walker, farewell to arm walker then to Tyreese himself.

Andrew Lincoln says Chad has been one of his great friends and says he’s been on two of the best episodes ever – season 4 episode 14 and this one. He also mentions Terrance Malick. He says to lose Emily and Chad back to back really hurt them. Chris says social media is abuzz and upset. One comments says Beth and Bob just died, we can’t lose Tyreese.

Chris asks why Tyreese hallucinated friends and enemies and mentions the governor. Chad says he was almost seduced by the governor who was a mad man and then Martin almost killed Judith. He says he was processing his subconscious. He says Tyreese was weak and fever pitched and all these deep things come out. He says it was also kind of heaven and hell with Martin and the governor then Bob, Beth, Lizzie and Mika.

Chad says Andy came to watch the scene and says Andy left him a message saying he came to this country to work actors like you. He calls Andy Lincoln a class act. Chris says it really is like a family on the show and says he knows how hard they take it. It’s quiz time to see how close attention you paid.

#1 How many miles did Carol tell Rick they’d made it?
#2 What did Tyreese say before going into Noah’s house?
#3 Which blast from the past did Tyreese see first?

(Scroll to the bottom of the post to see the answers.)

Greg has Tyreese’s hammer and Chris asks Chad if he’s going to hit Greg with it for writing him out of the show. Chris calls up a fan from the audience who asks now that Tyreese is gone, who is the moral compass of the group. Chris says you may as well have a Star Trek red shirt on if you’re the moral compass of that group. Chad says everyone needs to find a Tyreese in themselves.

He says he thinks they will all wrestle with it and hopes that’s how it goes. Greg says wrong and says it’s Michonne. Greg says she’s desperate for them to stop and find a place to live. Greg says you see a lot of character transitions. Rick wanted to move on but Michonne wanted to find a way to stay and Glenn has lost hope.

Greg says Glenn is in a bad place and that Michonne will help ground the group. Chris gives a Tyreese knit cap to the guy who asked the question. Now it’s time for the poll. What was the favorite Tyreese sensitive moment – forgiving Carol or saving Judith. It comes out saving Judith 55% and Carol 45%. It was a close one.

Chris asks how much fake blood they used and Chad says it seemed like 500 gallons. He says a lot of people asked him for bloody hand prints on their script copies and shirts. Greg says he was so bloody because Chad kept hugging him after each take.

Inside info from tonight’s episode:

Noah’s neighborhood was a real suburban neighborhood made to look like it had been looted.
The perimeter wall was created using digital effects.
One of the walkers was made to look like the crypt keeper as an homage to Tales from the Crypt.
Dead producer Gale Anne Hurd says Tyreese’s death scene were some of the most emotional they ever shot.

Sasha (Sonequa Martin-Green) says she and Chad had a real brother-sister bond and says it was hard to say goodbye. Greg says Norman Reedus called and he plays the voice mail. Norman calls Greg a beast and says it was amazing. Greg says the actors don’t even see the episodes until they play. Chad says Sasha had a strong rebuttal to him reminding her to be strong.

Chris says two characters have lost siblings and it was 17 days after Beth’s death that Tyreese died. Chris says the radio voice sounded like Andy Lincoln and Greg says it was him. Greg says he likes live stuff to be playing. He says Andy recorded it and they were thinking of using Simon Pegg for the voice but then decided to leave it as Andy in his normal Brit voice. Chris says Simon Pegg is probably going to hear this and curse.

Chad jokes and says, of course, his father had them listening to BBC. Chad reveals that Tyreese’s back story is that he was a professional football player at one point. Chris asks Greg if Noah’s community was attacked by walkers or people and Greg says bad people. Chris asks about the truck of walker torsos and Greg says that’s a mystery that will unfold later.

John Sanders shows us Noah’s brother’s bedroom on stage four of the studio. We see a geode and then a fake geode that holds blood that will show when the walker is hit. They cut a hole in the bed to hide Bob’s leg so he’d look dismembered. Chris says the next poll question is – Is Noah bad luck for the group? After all, Beth and Tyreese died after meeting him.

Chad says he was passing the baton to the younger generation in Noah. He says Noah has rage and anger. It’s 46% that say he’s bad luck and 54% say no. That’s a slim margin. A caller asks Chad would Tyreese have killed to keep Sasha safe from harm. Chad says it’s not a question of will he kill but will he kill egregiously. Chris says the answer is yes.

Chris says Xavion, the kid walker, was totally creepy. Greg says Xavion did a great job and they had a stunt double but he was creepy and scary the way they move. Greg says these kids are young when they audition but everyone loved him. Greg says he’s not a twin and Chad says he played one on TV. Greg laughs and says he can’t believe he went there.

Next we get a sneak peek of next week’s episode. We see Rick and the others standing in the road. A large band of walkers head toward them. Rick steps back and you can’t tell if he’s luring them into a trap or if they’re in real trouble. Greg says the rest of the season is going to get worse on them. He says the loss of Beth and Tyreese leave them in dark times.

He says there’s no food, no water and they’re out of energy. They have no shelter and Greg says people don’t last long with nowhere to go. Chris asks Chad how he wants Tyreese to be remembered. He says to remember his heart and him sticking to his beliefs. Chad says allow the tragedy to inspire them and move them forward. Chad says he’s working on The Expanse, a new space show based on the books Leviathan Wakes and says he’s working with Thomas Jane. He also is in a new zombie movie.

Greg says he also directed episode 12 and the finale. He says he wishes people could see the episodes on a big screen in a theater and says they’re really like movies.