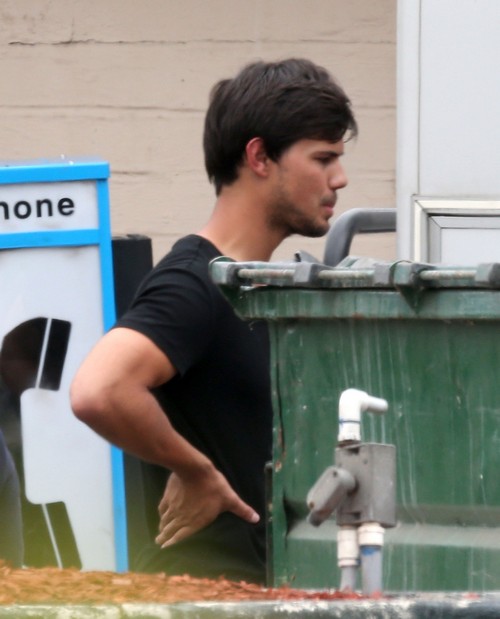 Taylor Lautner is still trying his best to pretend that he’s straight, which necessitates coming out with a new girlfriend every few months. His latest victim, uh sorry, ‘girlfriend’ is supposedly model Raina Lawson. E! News first reported the story, confirming that Taylor had broken up with Marie Avgeropoulos last year. And even there have been hookup stories about him and every single young actress in Hollywood, this Raina is the first person that he’s been ‘officially’ linked with.

Ever notice how every person that Taylor Lautner is supposedly dating wants to break into the movie industry and is never, ever someone established? That’s because – especially recently – people have figured out that Taylor’s team is just using these girls for PR, and it’s very unlikely that he actually likes these girls. And if the gay rumors are true, that makes sense, no?

Obviously, a young teen heartthrob can’t be gay, because that’s how American media and Hollywood have conditioned simpleminded people to think. I mean, Taylor hasn’t really been a ‘thing’ since the Twilight franchise wrapped up, but that doesn’t mean that his team isn’t still desperately trying to make him the next big thing. Even if they’ve had to rebound from his failed action star attempts, they’re still trying – and bless them for that, because his career was really over before it ever began.

What do you guys think about Taylor Lautner’s new ‘girlfriend’ being [unknown] model Raina Wilson? Do you think it’s just a PR showmance, or is there something real there? And if there is something real here, do you think that Taylor Lautner’s team will allow him to enjoy it in peace or will they try interfering and turning it into the Titanic of young Hollywood romances? I mean, they definitely tried that with Taylor Lautner and Taylor Swift, and it worked for about a hot second. But Taylor Lautner no longer has the power of Twilight behind him, so does anyone still care who he’s dating or not dating?