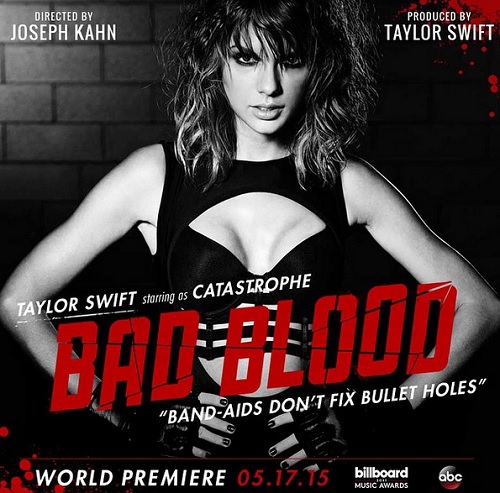 Taylor Swift has broken the internet posting spoilers for her new music video “Bad Blood” on Instagram. The single’s music video is set to make its world debut during the 2015 Billboard Music Awards on Sunday, May 17 – and at this rate literally every celebrity in the audience could have a cameo. What started as a few teasers that some special guests will be appearing has turned into a full-blown cast of A-Listers. Seriously, Harvey Weinstein couldn’t get this many superstars in one film.

Taylor Swift posted a photo of herself dressed as her alter-ego “Catastrophe,” the character she will be playing in the music video for “Bad Blood.” Swift’s legions of devoted fans went nuts over the black and white photo featuring Swift dressed in all black with slicked back hair and dark lipstick. But, there was no way they could have been prepared for what happened next – Taylor Swift posted nearly a dozen more pictures of celebrities in their “Bad Blood” gear who will also be starring in the video. And, the cast she has lined up is EPIC. And, their character’s names are pretty badass too.

Seriously, who isn’t going to be starring in Taylor Swift’s new music video? “Bad Blood” is going to become a new way to determine social statuses in Hollywood. We can see it already, “You weren’t in Taylor Swift’s music video – you can’t sit with us.” Rumor has it that there could be even more big name celebrities appearing in the premiere of the video that haven’t been revealed yet. On a scale of 1-10, how excited are you to see Ellen Pompeo, Kendrick Lamar, and Gigi Hadid all in one video running around dressed in black leather?

Here’s the list of current celebs, along with their alter-egos, who’ll be making an appearance: