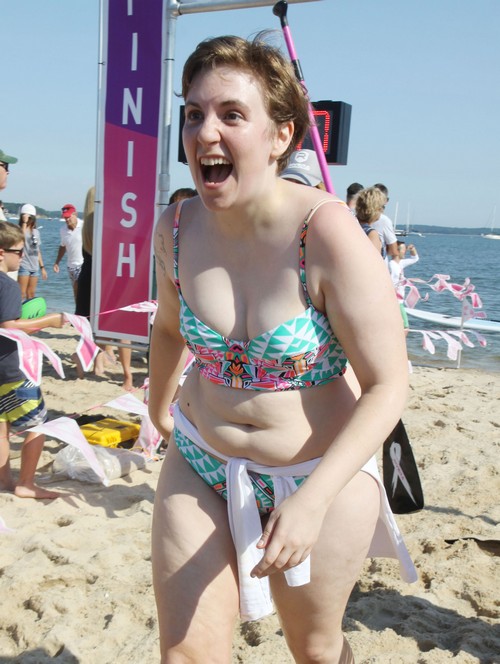 Taylor Swift is known for being a girl’s girl and sticking by her gang of BFF’s but she recently put off one of her gal pals Lena Dunham with insensitive remarks about her weight. When you look at Taylor Swift’s cadre of friends – Selena Gomez, Jamie King, Sarah Hyland, Emma Stone, Jennifer Lawrence and Lena Dunham – don’t you think of the Sesame Street song “one of these things is not like the other?” Taylor’s gang are all supermodel lovely and skinny gals with the exception of dumpy Lena.

And usually, Lena Dunham doesn’t seem to be too bothered by not being the “ideal” woman. She posts bikini selfies just like all the other 20 something celeb chicks despite the 40+ extra pounds she’s hefting around. But after a recent concert event of Taylor’s, Lena told Taylor that seeing photos of herself surrounded by Swift’s other gamine buddies did make her feel a little “chubby.” But rather than just comforting and reassuring Lena, Taylor offered her a makeover.

Nothing says “yep, you’re a fatty” like your uber-skinny friend offering to help you work out and buy slimming clothes. Understandably, Lena was very offended by Taylor’s offer and told her to “Back off.” There is no shame in Lena’s game and good for her for telling the stick-thin Swift where to get off. If anything, Lena should share some of her fashion and lifestyle tips with Swift who is increasingly turning into a Kardashian-esque drone.

A few years ago, Swift was always a breath of fresh air at awards shows because although she was always in stylish designer gowns, she was one of the few young women her age not putting her breasts and legs on near-naked display. But now, she’s showing up in almost frontless dresses, micro minis and crotch-high slit dresses that you expect from thirsty girls of that generation. It’s kind of sad to watch Taylor Swift sex herself up needlessly when she was always such a girl power advocate…

And Lena Dunham, despite her extra poundage, always shows up in an interesting gown on the red carpet, her array of tattoos on display and a cute guy on her arm who seems to not care about the muffin top or bizarre ink. And that alone should let Taylor know that Lena is the one who should be giving her lessons. Although heartbreak is Taylor’s musical bread and butter, she’d rather hang on to a man, but so far can’t seem to do better than a few months with any of her high profiles romances.

Yet Lena Dunham has been dating Jack Antonoff from fun. and Bleachers since 2012. The guy used to date Scarlet Johansson and Lena landed him! And now they are reportedly engaged and Jack is already talking babies. And Taylor is about two weeks away from her next very public break up, this time with Scottish DJ/singer Calvin Harris. Maybe Taylor needs to back off the offer of diet and fashion advice to Lena and sit down for a master class with the funny girl on how to keep a man…

The good news is, Taylor Swift and Lena Dunham’s friendship seems to be intact since Lena brushed it off and decided not to be too insulted that Swift thinks she needs a makeover. That’s a good thing because Taylor’s going to need a shoulder to cry on once Harris kicks her to the curb and she’s writing her next round of sad break up songs!