The Bachelorette 2015 Break Up: Kaitlyn Bristowe and Shawn Booth Wedding Cancelled Due To Nick Viall Jealousy? 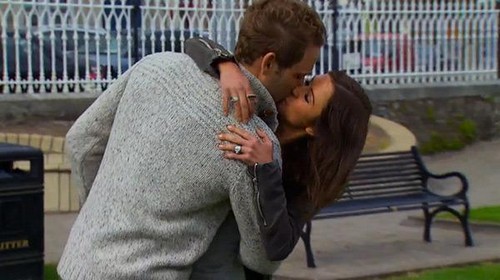 Did Bachelorette Kaitlyn Bristowe and Shawn Booth break up? The Bachelorette 2015 spoilers have been rolling in since Season 11 began, and Kaitlyn spoiled the ending of the show herself by posting a video on SnapChat cuddling in bed with her fiancé Shawn Booth. But, all of the drama that has been unfolding on The Bachelorette’s episodes has put a serious strain on their relationship and insiders say it will be a miracle if Shawn and Kaitlyn are still together by the time the finale airs on ABC.

We have learned two things about Shawn Booth and Kaitlyn Bristowe so far on The Bachelorette – and those two things are basically going to be the demise of their relationship. First and foremost, Shawn Booth is super insecure and has some major jealousy issues. Seriously, this The Bachelorette was like the last place on earth that he should have been looking for love. He has a meltdown every time Kaitlyn talks to another guy, so you can only imagine the hell that broke loose when her sex scene with Nick Viall aired. Secondly, we have learned that Kaitlyn Bristowe is pretty sneaky, and that only creates fuel for Shawn Booth’s jealousy.

As CDL recently reported, Kaitlyn Bristowe lied to her fiancé and told him that the sex scene with Nick Viall was staged – obviously when it aired on ABC he knew that she had gotten one over on him, and it did not go over well. A reliable source close to the couple dished to CDL, “Ever since Kaitlyn’s sex scene with Nick Viall, she and Shawn have been fighting like cats and dogs. He doesn’t trust her at all, and now he feels like their whole relationship was built on a lie. And, the fact that Kaitlyn doesn’t think that she did anything wrong is only making matters worse.”

Have you been watching Season 11 of The Bachelorette? What are the odds of Kaitlyn and Shawn actually getting married? Will they still be together by the After The Final Rose live show? Let us know what you think in the comments below and don’t forget to check CDL for all of you’re the Bachelorette 2015 spoilers and news!