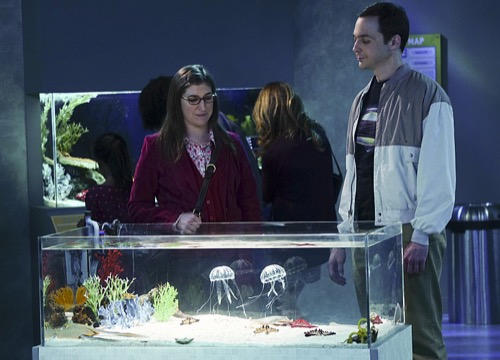 “The Big Bang Theory” fans are in for a hot and nerdy sex scene! Amy and Sheldon have been dating for five years on CBS’s “The Big Bang Theory” – but the always entertaining couple has never “gone all the way” … until now. According to an exciting announcement from “TBBT” producer Steve Molaro – Jim Parson and Mayim Bialik’s characters are finally going to have sex!

Steve Molara, executive producer of the wildly popular CBS sitcom released this official statement regarding Amy and Sheldon’s upcoming sex scene, “After over five years of dating, we felt the time was right for Sheldon and Amy to finally consummate their relationship, and we’re so excited for the audience to see the journey over the next several episodes.”

Ironically, Amy and Sheldon’s relationship is currently on the fritz – and Amy is even dating another guy. But, over the course of the next few weeks, the couple will start growing close again and eventually wind up in bed together on Thursday, December 17th. Just because Amy and Sheldon FINALLY have sex doesn’t mean that they will be back to their former power couple glory though. There is a chance that Jim Parson and Mayim Bialik’s romp in the bedroom is more like “goodbye sex” to give fans some closure before they go their separate ways for good.

Regardless of why it happens or what the outcome is, we can all agree that it is about time Sheldon and Amy FINALLY get to consummate their relationship. We were getting sexually frustrated for them – longest five years EVER. So “The Big Bang Theory” fans, are you as excited as we are for the December 17th episode? How do you think Sheldon will finally seal the deal? Let us know what you think in the comment section below!