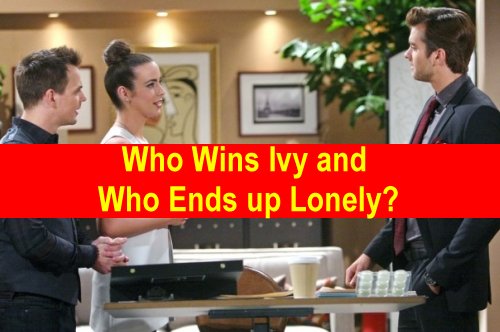 “The Bold and the Beautiful” (B&B) spoilers tease that some major couples will be uncoupled soon and there will be a Chinese fire drill of re-pairings with one lonely soul left out in the cold. Who gets ditched?

Here’s a look at what may be coming for the lovelorn of Forrester Creations.

First, it’s safe to say that Ivy Forrester (Ashleigh Brewer) wants to be with Thomas Forrester (Pierson Fodé). Ivy’s mouth may say no – at least when she’s not sucking face with Thomas – but her body is screaming yes.

Wyatt Spencer (Darin Brooks) is ready to fight to try and keep Ivy with him instead of Thomas, but it looks like the writing is on the wall and Thomas will win the sexy Aussie away from rival Wyatt. But that doesn’t mean Wyatt will be left lonely.

Liam Spencer (Scott Clifton) may have put a ring on Steffy Forrester (Jacqueline MacInnes Wood) but that won’t keep her eyes from wandering. Turns out that suburban domesticity with Liam may not hold her interest – no matter what she says.

Wyatt is obviously still carrying a torch for Steffy even if he’s focused solely on Ivy right now. This makes us wonder, is Wyatt all-in on Ivy just because he doesn’t want Thomas to win the war and take his toy or is it true love?

Steffy will also have some guilty feelings about being involved in a wager that ended up hurting Wyatt. Could Steffy’s guilt lead her to comfort Wyatt which leads to something more? Wyatt may come out of all this re-coupled with Steffy.

“Bold and the Beautiful” spoilers tease Bill Spencer Jr (Don Diamont) is mentally planning a double wedding, but it may not be for two couples he had in mind. Looks like only one Spencer brother will get the girl and Liam could end up empty-handed.

And don’t look for Liam to be a willing best man if his brother Wyatt plans to walk Steffy down the aisle. Can you imagine? It could be the messiest matrimonial ceremony yet.

You also have to consider how the uncoupling and recouplings will affect work at Forrester Creations. The bottom line is that there is about to be some musical chairs-type reshuffling in the love lives of the younger generation of singletons on “The Bold and the Beautiful.”

And if Liam comes out of this alone, where will he go looking next for love? Stay tuned to CDL for more “Bold and the Beautiful” spoilers, gossip and more.