The Bold and the Beautiful (B&B) Spoilers: Steffy Stands by Story as More Questions Arise – Ivy Seduces Wyatt for Support 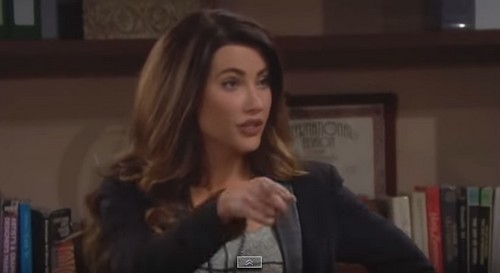 “The Bold and the Beautiful” spoilers for Tuesday, August 18, tease that Thomas (Pierson Fode) will get nervous about the potential consequences of Steffy’s (Jacqueline MacInnes Wood) actions. The video Ivy (Ashleigh Brewer) shot of Steffy striking Aly (Ashlyn Pearce) could prove devastating if it falls into the wrong hands. Thomas will say it would’ve been better for Steffy if she’d just come forward when she first remembered more about that night. However, Steffy will insist that everything will be OK. Wyatt (Darin Brooks) promised to delete the video and Steffy feels certain that he will.

It seems Steffy might be underestimating Ivy. It’s possible that Ivy has copies of that video somewhere. Even if she doesn’t, Ivy will surely find a way to keep Wyatt on her side. “The Bold and the Beautiful” spoilers say Ivy will declare that she knows Steffy got to Wyatt. Ivy will imply that Spencer males just can’t resist Steffy. There’s undoubtedly some truth to Ivy’s argument. After a bit more bickering, Ivy will try another approach to get Wyatt back on board with the original plan.

“The Bold and the Beautiful” spoilers reveal that Ivy will seduce Wyatt and it’ll work like a charm. Liam (Scott Clifton) and Wyatt must share some sort of flip-flopping gene. It’s Wyatt’s turn to waffle as he supports Ivy once again. When it comes down to it, Wyatt has to go with the woman who can offer him the most for his loyalty. Right now, that woman is Ivy. B&B rumors hint that Ivy will express her gratitude in the bedroom.

Back at Forrester Creations, Lieutenant Baker (Dan Martin) will suggest that being a little crazy doesn’t justify killing someone. It’s clear that Baker is convinced there’s more to Steffy’s story. If Steffy can’t provide satisfactory answers to his questions, Baker may decide that he needs to get justice for Aly. Viewers know that Steffy acted in self-defense, but she still isn’t being honest about what happened out on the highway. Will Steffy ever step up and tell the truth? Stay tuned to the CBS soap for updates on Steffy’s road to integrity.

So B&B fans, what do you think about the news that Steffy will have faith in Wyatt? Once Ivy brings Wyatt back into her corner, will she be able to keep him there indefinitely? What about Lt. Baker’s questions? Will Steffy finally crack from all the stress? Let us know what you think in the comments below and don’t forget to check CDL often for the latest “Bold and the Beautiful” spoilers, rumors, updates and news.