The Bold and the Beautiful Spoilers: Is Hope Logan Recast On The Way – Kim Matula Removed From B&B Opening Credits? 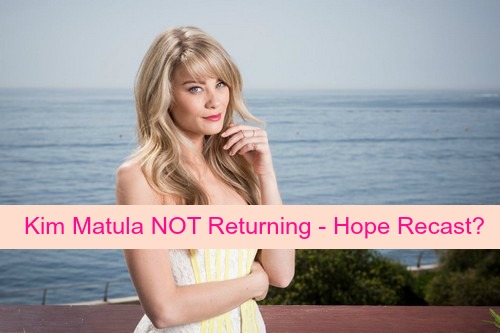 “The Bold and the Beautiful” (B&B) spoilers are in, and fans are irritated after the CBS daytime drama opening seemed to announce that Kim Matula as Hope would not return to the soap opera. Fans have been holding on to the slim chance that Kim may return in late 2015 or early 2016; however, it looks like that may never happen. Will TPTB on B&B recast Hope Logan?

Hope [Kim Matula] was last seen on the show on December 12, 2014. She had suffered a miscarriage after a scuffle with Quinn [Rena Sofer]. Quinn wasn’t directly responsible for her loss, but she certainly contributed to her fall, and Hope held her completely responsible. The miscarriage caused a rift between Wyatt [Darin Brooks] and Hope, which prompted her pickup and move to Italy.

Kim Matula appeared briefly in March 2015 via Skype on the show as Hope. The first rumor started on her return for Ally Forrester’s [Ashley Pierce] funeral- which didn’t happen. She was also absent for Rick [Jacob Young] and Maya [Karla Mosley] Forrester’s wedding in August.

There were multiple sources reporting that Kim was in talks of returning over the summer. According to the rumor, she was in talks of finalizing her contract for Hope’s return, but it was never inked due to some type of [undisclosed] dispute. Does The Bold and the Beautiful need Hope Logan? Ratings are down and many fans think Hope’s return is just the shot in the arm that the show needs to get some sizzle back.

The new Bold and the Beautiful opening reel shows Kim Matula missing from the credits which is a clear message to the fans. Clearly, B&B is telling fans that Kim Matula [Hope] will not be back on the show.

When the daytime drama took the time [and money] to change the opening of the show, they had to be sure about who would be sticking around long-term. The fact is filming the opening of any show is a very expensive project – which explains why they didn’t change it in quite some time.

Fans reacted to Kim’s disappearance from the open credits with complete disgust. They were still hoping she would return, even if it was a small stint on the show. Do fans now face a Hope recast? Kim Matula had a very large fan base and many [falsely] believe that no one could ever fill her shoes as Hope Logan.

It looks like TPTB finally made their decision, and Kim Matula was officially removed from the opening credits. Can we expect a Hope Logan recast? Fans, tell CDL how you feel about Kim not returning to the show? Don’t forget to come back later for more “The Bold and the Beautiful” spoilers and news!