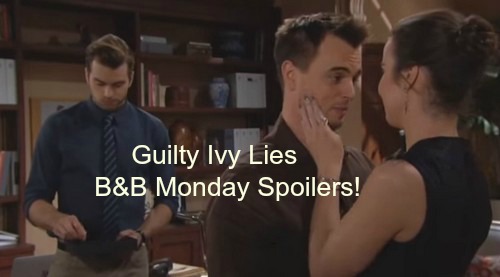 “The Bold and the Beautiful” (B&B) spoilers for Monday, November 23, reveal that Ivy (Ashleigh Brewer) will have a tremendous amount of guilt after her passionate encounter with Thomas (Pierson Fode). However, Ivy won’t entirely regret what she did. Though Ivy knows it was wrong to cheat on Wyatt (Darin Brooks), she’ll declare that something about making love with Thomas felt so right.

Ivy obviously has a big problem now. “The Bold and the Beautiful” spoilers tease that Ivy will wonder what she’s going to say to her boyfriend. How can Ivy just act like nothing happened, especially when it really meant something to her? Nevertheless, it seems Ivy will pretend to be a loving and trustworthy girlfriend for the time being.

Ivy may not be willing to come clean about giving into temptation, but the secret is bound to get out eventually. When Wyatt gets updates on Ivy’s betrayal, he may decide he’s done. After everything he went through with Hope (Kim Matula), the last thing Wyatt wants is to wait around while his woman plays the field.

In the meantime, another couple could be at odds due to sharing. “The Bold and the Beautiful” spoilers indicate that Nicole’s (Reign Edwards) surrogacy plans will get in the way of her relationship with Zende (Rome Flynn). Nicole will ask Zende if he feels differently about her now that she’s pregnant. Zende will admit that he still cares deeply for Nicole, but that’s also sort of the issue.

This romance is new and Zende just isn’t ready to share Nicole yet. Of course, Nicole probably won’t know what Zende expects her to do about that. Nicole told Zende that she’d seriously consider backing out if he couldn’t handle the surrogacy. Zende agreed that he could, but it appears he’s starting to change his mind now that it’s actually in progress.

It sounds like Nicole could pay the price for the gift she’s giving Rick (Jacob Young) and Maya (Karla Mosley). B&B rumors hint that this baby will continue to cause plenty of drama for all parties involved. Stick with the CBS soap to see the trouble this surrogacy will stir up.

So B&B fans, what do you think about Ivy and her guilty pleasure? When will Wyatt get the news that Ivy cheated on him? What about the strife between Zende and Nicole? Are they on the verge of a breakup? Let us know what you think in the comments below and don’t forget to check CDL often for the latest “Bold and the Beautiful” spoilers, updates and news.

The Bold and the Beautiful (B&B) Monday, November 23, Promo Video