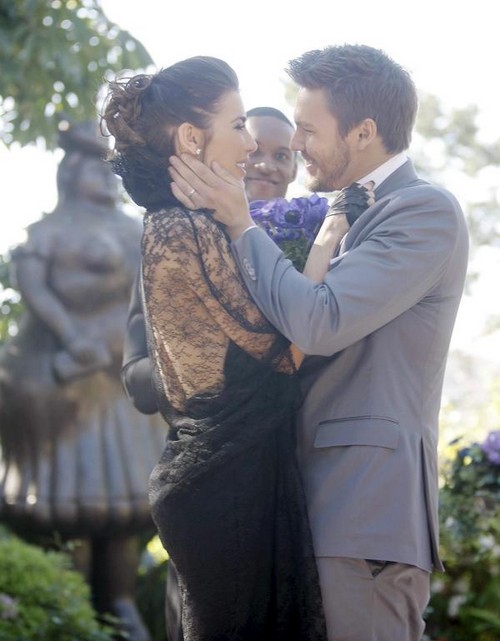 “The Bold and the Beautiful” spoilers and casting news reveal that Jacqueline MacInnes Wood is heading back to the CBS soap (again) as Steffy Forrester – and this time it is for good! The actress has reportedly signed a contract with B&B, and Wood’s character, Steffy, will be back permanently. In 2014, “Bold and the Beautiful” fans were thrilled when spoilers confirmed that Steffy was on her way back to Forrester Creations, however her stint was brief and we were all sad to see her go again.

“Bold and the Beautiful” spoilers reveal that Steffy Forrester is on her way back to the CBS soap, and she will bring an exciting new storyline with her. Wood’s return date is scheduled for Tuesday, May 26. Woods recently sat down with TV Insider to dish some spoilers on her big return to B&B – and the actress teased that Steffy might just be “recycling” her relationship with Rick Forrester. Obviously there will need to be something a change in Maya’s relationship with Rick for this is occur but with the Myron reveal on the way the future for Rick and his transgender remains uncertain at best. Wood explained to TV Insider, “Which is why I can see her going back to him (Rick). Steffy is into recycling. She’s always thinking. There’s a reason she was named for her grandmother, Stephanie. There’s always a tactic, always a strategy. Rick and Steffy were married…right?” Well actually Steffy and Rick were never married but they dated.

Ironically, spoilers have also been teasing that Kim Matula is in talks with B&B producers to sign a contract and return the CBS soap full-time again as Hope Logan. Any fan who is familiar with “Bold and the Beautiful” can tell you that the two actresses do not get along and have been rivals for years, and it is rumored that the only reason Wood agreed to return to B&B was because Matula had quit. So, it will definitely be interesting to see if both women wind up back on contract at the CBS soap – sparks are sure to fly both on camera, and behind the scenes.

Are you as excited as we are to have Jacqueline MacInnes Wood back on contract full-time at the CBS soap? What do you think about her hooking up with Rick Forrester again? Will Wood threaten to quit if Kim Matula comes back full-time too? Let us know what you think in the comments below and don’t forget to check CDL tomorrow for more “Bold and the Beautiful” spoilers and news.