‘The Bold and the Beautiful’ Spoilers: Can Caroline be Pregnant – Who’s the Baby Daddy, Ridge or Rick? 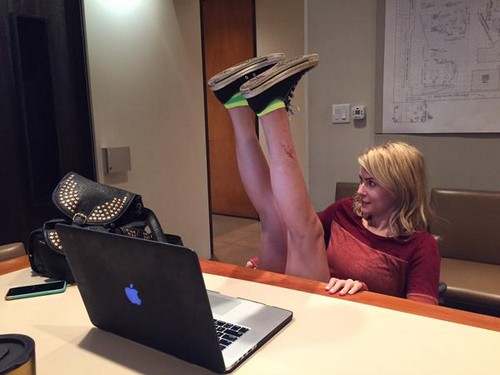 The Bold and the Beautiful spoilers reveal that we finally hear from Caroline Forester (Linsey Godfrey) after she left to visit her mom  in New York. On a recent B&B episode Caroline calls Liam Spencer (Scott Clifton) to complain about Rick Forrester’s (Jacob Young) constant note messages, she’s doing more work and revisions than ever did in LA. Since the divorce papers came through Liam thought things were better between Caroline and Rick, Caroline thinking the same thing. Caroline thinks that Rick is just pushing but Rick only pushes to get the best work from her. Liam asks Caroline why she isn’t back since she and Ridge Forrester (Thorsten Kaye) are hot and heavy. Caroline says that “you’ll know soon enough.” Caroline’s been gone for over two months, could be that she’s pregnant? Who be the daddy?

Meantime, Caroline has been in relationship with Ridge since her marriage fell apart. What started as a simple B&B power play by Ridge to gain the CEO position ended his brother Rick’s marriage to Caroline. Ridge did it because he didn’t want to see Rick get the CEO position and felt that Rick didn’t deserve it. Caroline and Ridge fought their feelings for one another in vain. Everyone was against them being together, including Brooke Forrester (Katherine Kelly Lang). Brooke was hoping to get back together with Ridge herself and was hoping that Rick would reconcile with Caroline. It wasn’t until Rick asked for a divorce that Caroline and Rick started to get hot and heavy. They were only with each other for a short time before Caroline left for her trip. Could Ridge possibly be the father of Caroline’s baby?

Futhermore, Caroline’s relationship with Rick was one in which they were very committed to each other in every way. Until Ridge asked Caroline to help him design his collection. Caroline’s marriage fell apart when Maya Avant ( Karla Mosley) outed the cheaters during a Forrester Creation meeting in front of everyone. Caroline couldn’t deny the fact that she did kiss Ridge during one of their drawing sessions. What Rick couldn’t get over is that Caroline was romantically involved with Rick’s enemy, Ridge. Caroline knew how Rick felt about Ridge.  So how could Rick be the baby daddy?

While Caroline’s marriage was falling apart and Rick was pretending that they were working on their marriage for the sake of his father Eric Forrester (John McCook) – in the meantime he was shacking up with Maya. Caroline was all over the place and almost passing out when Rick decided that he wanted to end his marriage. So could it be possible that Caroline was already pregnant and did not know it?

B&B Fans, Could Caroline possiblely be pregnant? In the short time she been with Ridge could he be the father? Knowing that they weren’t together while trying to make marriage work could Rick be the father? Per Brooke, Ridge had a vasectomy done so is it possible that he could of father this unborn child? Of course this is soap opera land where anything is possible, right? Come back to CDL for more ‘The Bold and the Beautiful’ spoilers, news and updates.