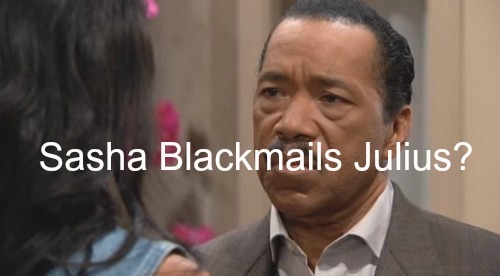 “The Bold and The Beautiful” (B&B) spoilers tease that Sasha (Felisha Cooper) is not leaving LA anytime soon and will blackmail her father Julius Avant (Obba Babatunde) to get off her case about pressuring her to leave town and to get a Christmas treat.

CDL called the secret daughter reveal a week ago in our spoilers when we indicated that Sasha was another Avant daughter and, on the December 21 episode, Sasha confirmed it. But what now? Julius clearly doesn’t want Sasha there, but why?

Obviously Sasha has been around his family for years already – Sasha is one of Nicole Avant’s (Reign Edwards) besties from school so that means Nicole and Vivienne Avant (Anna Maria Horsford) likely know Sasha’s mother.

Sasha and Nicole went to school together so that means Vivienne may have been in PTA meetings sitting right beside Julius’s other baby mama. Julius cannot afford to have Sasha blab his extra daughter secret but it sounds like he’s been able to control her in the past.

When they were back home in Illinois, there was nothing Sasha could get from Julius so telling the secret did her no good. There was no advantage to be gained and she could have lost her best friend Nicole over the secret if it came out, so she stayed quiet.

But now, with a glittering new life dangling right in front of her in LA, Sasha has a lot to gain. By hanging in LA around Nicole and Maya Avant (Karla Mosley), Sasha can see herself leading a glamorous life. But that is not good for Julius.

Julius may still be hoping to profit from Maya’s relationship with Rick Forrester (Jacob Young) and from knowing the rest of the Forrester brood. The Sasha paternity secret, though, could ruin all that Julius is hoping for – in an instant.

Julius has had a holier-than-thou attitude since he’s come to LA – particularly when it came to Maya’s lifestyle choices. But the news of him having a love child for the past 18 years would destroy Julius’ moral high ground.

It’s better for Sasha to keep quiet and leverage the secret to get Julius off her back about staying in LA. But now that Maya and Rick announced their generous gift of an Avant family vacation to Hawaii, Sasha is madder than ever.

Sasha wants to go on that trip and is ready to spill to everyone that’s she’s also an Avant to get her way. Julius is being the world’s worst father and continues to push her away – he sees Nicole as his only true daughter.

But Sasha rightly is demanding her due and will make a fuss if Julius doesn’t make this happen for her. What can Julius say to Rick and Maya to get them to bring Sasha along without letting out his secret? And if he doesn’t cave to the blackmail, Sasha will out him.

The good news is, Vivienne seems to like Sasha and doesn’t suspect a thing, so Sasha hanging around doesn’t seem so strange – but it might soon. How many teenaged girls hang around their best friend’s dad when no one else is around?

Once people begin to notice it’s strange, perhaps on the Hawaii trip, they may first assume that Julius is fooling around with Sasha. If Vivienne thinks her hubby is having an affair with a teenager, finding out Sasha is his daughter – and not his lover – may be a relief.

But for now, it will be interesting to watch the dynamics play out with Julius and Sasha. Julius likes to be controlling, but he won’t be able to rein in his out-of-control daughter Sasha for much longer. And if Julius doesn’t start playing nice, Sasha may wreck Nicole’s life out of spite.

Nicole has everything Sasha wants – a promising fashion career, a hot boyfriend and, most of all, Julius as her publicly acknowledged father. Sasha does care about Nicole, but this glam new life of her BFF’s may drive Sasha over the edge with envy.

What do you think B&B fans? Does Sasha have the right to stay in LA and go on the family vacay? Will Julius’ controlling attitude come back to bite him when it comes to treating Sasha like a dirty secret?

Are you excited to see Julius get the comeuppance he deserves when the love child news breaks to everyone else? Stay tuned to CDL for daily “The Bold and The Beautiful” spoilers and news.