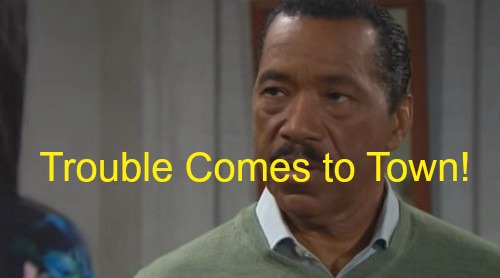 “The Bold and the Beautiful” spoilers for Monday, December 14, tease that new character will debut on the CBS soap. Sasha (Felisha Cooper) will arrive in Los Angeles looking for her friend, Nicole (Reign Edwards). It seems Nicole will be thrilled to catch up, but Julius (Obba Babatunde) won’t be pleased to learn someone from the Avants’ past has surfaced.

Julius will likely express his outrage to Vivienne (Anna Maria Horsford) when he hears that Sasha is now in the picture. B&B spoilers say Julius will shout that he doesn’t want a parade of people from back home showing up. They could be after Maya’s (Karla Mosley) money. In Julius’ opinion, Sasha is just scrounging for a slice of the Forrester pie.

Julius’ anger will prompt a confrontation with Sasha about her sudden appearance. “The Bold and the Beautiful” spoilers indicate that Julius will tell Sasha to scram. It looks like Sasha may have visions of strutting her stuff on the runway.

Perhaps Sasha will believe she can make all her dreams come true if she starts hobnobbing with the Forresters. However, Julius will make it clear that Sasha isn’t meeting any of the fashionable family members. Instead, Julius will order Sasha to go back where she came from.

We all know that Sasha won’t be leaving anytime soon. You can bet that Sasha will want to stick around and stir up trouble. Sasha has a secret and she’ll be willing to use it to her advantage if need be. The Forresters will be introduced to Sasha before long, but they’ll have to take care of another crisis first.

“The Bold and the Beautiful” spoilers reveal that Eric (John McCook) will deliver the news that Ivy (Ashleigh Brewer) filed for a restraining order against Steffy (Jacqueline MacInnes Wood). That means Steffy won’t be around the office until the case is resolved.

Steffy will undoubtedly be fuming about the fact that the president of Forrester Creations can’t even be on the premises. It sounds like there’s going to be some major tension at FC. Stay tuned to the CBS soap for updates on the drama ahead.

So B&B fans, what do you think about Sasha’s arrival in LA? Are you anxious to see how Sasha will fit in? Is there more to Julius’ disdain for Sasha? Will Eric and the others worry about the conflict between Steffy and Ivy? Let us know what you think in the comments below and don’t forget to check CDL often for the latest “Bold and the Beautiful” spoilers, updates and news.