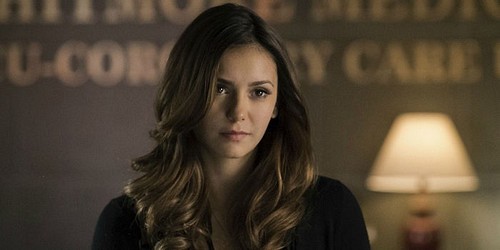 Here are some “The Vampire Diaries” spoilers for season 7. For those hardcore Vamp Diaries fans out there, you can be confident that the hit CW show will not suffer for the lack of Elena (Nina Dobrev), even if Mystic Falls looks to be falling apart without her. There is a LOT to look forward to in Season 7 so today we’ll take a look at some things we definitely know will happen on the show and some “Vampire Diaries” rumors and speculation about the future of the show without Nina Dobrev.

First, we’ve got three men who just lost their lady loves and they will not take it well. Alaric Saltzman (Matthew Davis) just lost Jo Laughlin (Jodi Lyn O’Keefe) moments before they were man and wife PLUS he lost his precious twin babies still in utero. Damon Salvatore (Ian Somerhalder) had to lock Elena Gilbert (Nina Dobrev) in a box slumbering like a modern-day Sleeping Beauty so she’s as good as dead. And Tyler Lockwood (Michael Trevino) offed GF Liv Parker (Penelope Mitchell), albeit at her request, to reactivate his werewolf curse to save his life.

So we’re heading into Season 7 with a pissed off werewolf, pissed off vampire and a pissed off hunter. Needless to say, there will be dark times ahead. Which, while sad, is terribly, terribly exciting. The show is now pretty much off cannon and not working from the books at all which gives the show runners free reign to do anything they want. At the end of the last Season 6 episode, we saw Damon atop the Mystic Falls clock tower and the whole town looked like rubbish.

Windows are boarded up, plastic covers some of the businesses and the place looks worse than it ever has. There is a time lapse between the end of Season 6 and the start of Season 7, but how much? And who trashed the town? With all the Geminis dead, there’s really only one major candidate for who will be the “big bad” at the start of Season 7. My money is on Lily Salvatore (Annie Wersching) and her dangerous crew of hybrid vampire-witches!

Romance, romance, romance. Despite the murder, mayhem and bloodshed we can expect in Season 7, there’s always sexy time on Vampire Diaries and this season will be no exception. Naturally, we can expect some Stefan Salvatore (Paul Wesley) and Caroline Forbes (Candice Accola) action, but what else. Personally, I’ve got fingers crosses that Damon and Bonnie Bennett (Kat Graham) explore their grief together over losing Elena and end up hooking up.

Somerhalder said, “I’m excited to tell these f-d up, dark, sexy, edgy, volatile stories. Now we get to go back to really great storytelling that was the Season 1 and 2 of the show that we all loved. I want that Damon back.”

The tension between those two is undeniable plus Damon proved himself by choosing her over Elena (at least in the short term). How hot would those two be? White hot! But for Season 7, what’s more likely is that they will stick to friendship – after all, with Elena gone, Damon needs a moral compass to keep him on the rails, and Bonnie will serve as his Jiminy Cricket. But maybe in Season 8, we’ll see some vampire witch smoochy face!

And here’s another question – now that Tyler has his fuzzy side back and Elena encouraged him to skip town, will he? Executive producer Caroline Dries revealed that Tyler will start off Season 7 out of town with Jeremy Gilbert (Steven McQueen) hunting vampires! They filmed footage of he and Jeremy driving away but had to cut it for time’s sake from the last Season 6 episode.

This is awesome because Jeremy has some serious hunter skills and Tyler just has to give any vampire a little love bite and they’re dead unless they happen to have Klaus Mikaelson (Joseph Morgan) on speed dial for an emergency transfusion. Hopefully Tyler will stick around for a bit of Season 7 but, to be honest, my real hope is that he takes his adorable fuzzy behind to New Orleans and the cast of The Originals.

Since all of the other wolves in NOLA are under the Crescent Curse, that would leave Tyler the only functional werewolf in the city. That would add some spice to that cast and leave him room to return to Mystic Falls now and again and for some other Originals/Vampire Diaries cross episodes which are always fantastic.

Matt Donovan (Zach Roerig) will take the badge and protect Mystic Falls as a newly minted lawman, but how cool would it be if Alaric was his underworld counterpart and they were bro-hunters together? There’s just one Gilbert ring left and it’s in Matt’s hands courtesy of Damon. Wonder whose finger it could be on in Season 7 and could Freya or Bonnie make another ring? Something to consider…

Alaric will still be a wreck when Season 7 starts, according to “Vampire Diaries” spoilers and he’ll be heavily dependent on Damon to hold him together. This may help assuage some of Damon’s grief because at least Damon knows his love is only in cold storage and not dead and gone as Jo is. And Damon will have some serious family drama on his hands.

Vampire Diaries showrunners have leaked that Lily and crew will be the villains for Season 7, so it’s going to be Salvatore vs Salvatore. The big question is whether Enzo (Michael Malarkey) will wreak havoc with Lily and the heretics or if he’ll try and be the calming influence on Lily and crew. Enzo has been abandoned and alone so long, he’s desperate for a mother in his life and Lily seemed ready to welcome him into the fold fully.

Enzo likely will not be able to resist the lure of a mum and a family of siblings, even if they’re evil. And, not to forget, Enzo can have quite the evil streak of his own, even if he’s been kindler and gentler lately. But, on the flip side, he also genuinely cares about Damon so Enzo will have to really assess where his loyalties lie.

And, the vampire-witch hybrids aka heretics, will be hard to kill, but we got a preview of what it will take to take them down in Kai’s destruction. Remember, Tyler’s bite weakened him until Kai figured out how to magic the werewolf venom out but, by then, Damon snuck up and took his head. So looks like we have lots more decapitations to look forward to since traditional killing methods don’t work on the heretics. This also means they’ll be much harder to fight since they have magic and fangs.

The Vampire Diaries Season 7 launch date has not been set yet, but typically the CW slates it for mid-September to early October, so we’ve just got four to four and a half months of nail-biting to go before we finally get to see the fallout and what’s up with all our favorite witches, vampires, hunters, wolves and humans! Come back to CDL for more The Vampire Diaries Season 7 spoilers, news and updates.