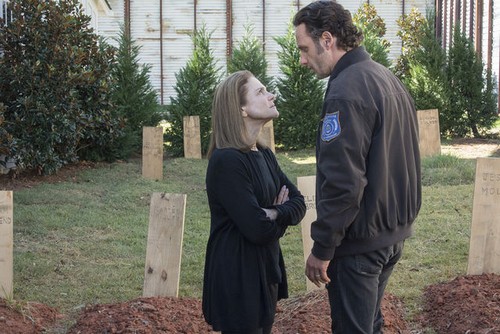 The Walking Dead Season 5 finale spoilers look at Daryl’s death and if it takes place on the final episode – what do the rumors and leaks tell us about who dies? The Walking Dead Season 5 finale is this Sunday, March 29, and it promises to be packed with drama. The final episode of TWD has been extended to 90 minutes, which suggests a plot to complex to be detailed in its usual hour long time slot. After a few painfully slower episodes, fans are dying to see what happens on ‘The Walking Dead’ finale.

Spoiler Alert: This post may contain spoilers including possible ‘The Walking Dead’ plot spoilers for season 6.

It’s inevitable that something or someone breaches the Alexandria Safe Zone. In this apocalyptic world, no one is completely safe and likewise, no place is completely safe. Strong contenders for breach are the walkers and whoever is behind the walkers marked with the letter W. Last week’s episode where Daryl and Aaron stumble upon a pile of freshly cut body parts and a woman tied to a tree is a huge hint to something wicked coming.

Examining promos, we see Jessie standing with fellow members of the community looking horrified at something in the night. They all have their coats on, so it tells us their fear is brought on by something outside. Did they witness another attack on Pete? Are walkers breaching the gate? Or has the new villain of season 6 made his or her debut?

Another portion of the promo reveals Rick outside a house. He is wearing a coat and you can see the lit window behind him as a walker pops out from the shadows. That strongly suggests walkers have invaded Alexandria. It would follow the plot of the comics in which a herd breaks down the walls and begin to devour the city.

However, this event would be covering a HUGE event that happens in the graphic novels. One that would easily take three or four episodes to cover. As we know, the TV show doesn’t stick 100% to the books, but this indicates a major spoiler if zombies have made it into the safe zone. So, don’t bank on a full breach of a herd into the city. It’s a strong rumor that the Wolves – those responsible for W markings will be one of the major focuses, instead.

A second promotional teasers shows what appears Father Gabriel taking to the road. He appears to be punching or stabbing a downed walker. Something is going to happen with this character aside from being a tortured soul and a turncoat, Father Gabriel is falling short of living up to his potential. In the comics, the preacher has a redeeming moment when the zombies find their way into Alexandria.

If Daryl Dixon dies, fans riot. Something big will happen with this plot line. Daryl and Aaron are on a run together and finding a trail – a light in the distance, the hacked up body parts, the woman tied to a tree. In the promos, the two appear to be running through some kind of warehouse or factory. The duo run past a truck trailer at one point either chasing something or being chased.

Norman Reedus, who plays Daryl, was asked by ET about the TWD season and finale and he responded with a rather general, “Wow…bring your Kleenex and you’ll be screaming at your television.” Is it a hint to his own death or just the death of others? As CDL covered, one of the show producers promised lots of blood – and not just walker blood. Another site, Undead Walking, claims no one from Rick’s group will die and assures Reedus fans Daryl lives. Let’s hope they are right!

A lot of deaths were teased in another promo that showed Rick and Deanna talking in makeshift graveyard. At least four of the graves were freshly dug, indicated recent deaths. However, another image shows a different angle allowing viewers to see the names on the boards. None of them are recognizable characters. One board, barely legible, has the name Carter carved into it. Another has only a fraction of the first and last names – Jes and Mol. Don’t panic – Jessie’s last name is Anderson.

Finally, another possible vital moment show in promos is the apparent exchange of a gun. Someone with a bandaged right hand hands the gun to someone wearing a tie. We found out Nicholas was the one who found Rick’s hidden gun outside Alexandria, and he still has it. Is he giving the gun to Pete to help protect himself from another attack?

We do know that Glenn and Nicholas will get into another scuffle and, according to our insiders, of them is shot! Could Glenn be one of the teased deaths on ‘The Walking Dead’? It’s unlikely as his character’s death is far more gruesome in the graphic novels, and we do get a shot of Glenn hunched over, crying.

Sounds like a lot will happen during the finale of The Walking Dead. What are your predictions? Will someone of Rick’s group die? If so, who will it be?