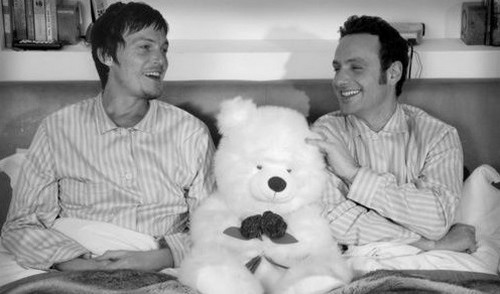 The Walking Dead spoilers Season 6 tease that the writers and producers of the wildly popular TV show on AMC are considering killing off a major male character, and fan favorites Daryl Dixon played by Norman Reedus and Rick Grimes portrayed by Andrew Lincoln are allegedly on the chopping block. Considering the fact that after all the entire story revolves around a zombie apocalypse, it’s actually pretty shocking that both Daryl and Rick have made it this far relatively unscathed and without being killed off – although they have both faced a lot of close calls.

The May 4 edition of OK! Magazine reveals, “The Walking Dead’s two male leads may have survived the mayhem of last month’s season finale, but an industry insider reveals that both Andrew Lincoln and Norman Reedus know their time may soon be up. British star Andrew would be the easier to send packing. Not only is his family still based in the U.K., but the producers also fear a revolt if the resident heartthrob Norman is killed off. He receives more fan mail than all of the other cast members put together.”

OK! Magazine’s inside source went on to dish about The Walking Dead Season 6 spoilers and explained, “Producers don’t want viewers to feel safe in thinking that the characters they love best will never bite the dust. The show takes place in a brutal post apocalyptic world and they want fans to focus on the overall storyline, not one particular character.” We totally get that in order to make the show seem more realistic – the characters can’t just keep narrowly escaping death and eventually their luck is going to run out. But, we can all agree that killing off Norman Reedus’s Daryl Dixon character or Andrew Lincoln’s Rick Grimes would basically be ratings suicide. Could OK!’s interpretation of the source be accurate?

What do you think Walking Dead fans? Is it time to part with Reedus or Lincoln, say goodbye to Daryl or Rick? Do you think there is any truth that one of their characters will be killed off? Let us know what you think in the comments below and don’t forget to check back with CDL for more The Walking Dead Season 6 spoilers and news!