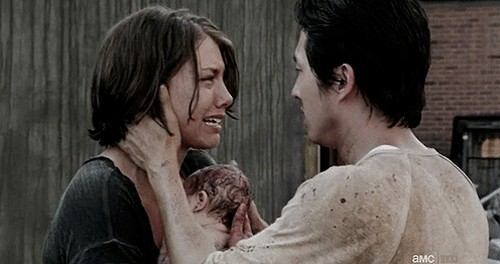 The Walking Dead has finally returned, and we have some major TWD season 6 spoilers. Rumor has it, Negan has finally been cast and a principal character might be pregnant! We are only 1 episode into the sixth season of ‘The Walking Dead,’ but thanks to previous spoilers and the graphic novel, it looks like some big things will be happening very soon.

The first episode of TWD season 6 focused on flashback and the massive herd of walkers threatening Alexandria. The show largely relied on rallying Alexandria behind Rick’s leadership, but it’s possible, the show subtly slipped in a HUGE plot development.

In the scene in where Glenn and Maggie are discussing joining Rick to battle the herd, Glenn explains that Deanna is going to need Maggie to be her support after watching her husband die at the hands of lady-beating Pete and losing her son. In a subtle and veiled response, Maggie agrees to stay but notes Deanna’s need is “not the only reason.” That reason could be that Maggie Greene is pregnant with Glenn’s baby. It would be earlier than the graphic novel’s timeline as Comicbook.com points out, but still fits with the plot of the graphic novels nonetheless.

Negan will also finally be appearing on ‘The Walking Dead’ after months of speculation. Don’t get too excited to see much of him in season 6. A casting call in late September went out under the name “Orin” describing the need for a man in his “30s to mid 40s.

A physically imposing, charismatic, brutal, smart, ferocious, frightening, hilarious, inappropriate, oddly friendly, fun loving sociopath that is both a leader of men and a killer of men. He has both a practical and emotional intelligence, he’s a brilliant strategist, he’s pure, dangerous, murderous, often gleeful, that still has both discipline and a code. And he has a temper that can vaporize people. He’s truly one of the strongest personalities ever…”

The Hilltop Colony also looks filming-ready thanks to images shared by The Spoiling Dead Fans. That is a huge sign of Negan along with the confirmation of the new vital character – Jesus also known as Paul. For those who don’t know, Jesus and the Hilltop Colony will introduce Negan and his group called The Saviors.

Does this mean the show will follow the graphic novel’s plot to the letter? If so, not only will Maggie be pregnant, Glenn – a fan favorite since the start of the show – will die. What do you think? Will Glenn be killed off as ‘The Walking Dead’ has been hinting at? Let us know what you think in the comment section below.