The Young and the Restless Spoilers: Absurd Cabin Killer Storyline with Victor and Marco Spins Out of Control? 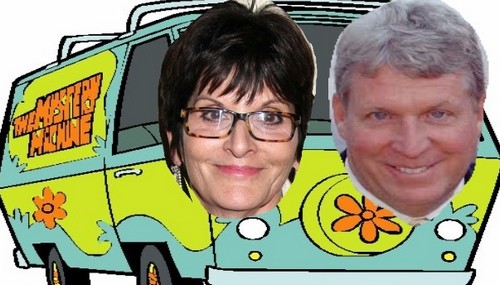 The Young and the Restless spoilers examine the August 12 Cabin Killer reveal and what this implies about the status of Y&R fans in big picture. When the new Headwriter Chuck Pratt Jr. was hired in Nov 2014 Y&R fans waited eagerly to see their favorite soap get back on track from the train wreck it had become with Jill Farren Phelps at the helm. Pratt promised Y&R fans they would have excitement and drama.

This beloved soap has seen negative change after negative change since the death of Creator Bill Bell in 2005. After the firing of Multi Emmy winner Executive Producer Edward Scott (Melody Thomas Scott’s husband) in 2007 Y&R hired family member Bill Bell Jr’s wife Marena Bell which proved to be a mistake. Bell finally left and Y&R hired known Soap Killer Jill Farren Phelps – needless to say she has lived up to her soap killer reputation. Perhaps it is the “reputation” she has for not getting along with some actors/actresses causing them to leave which ends up hurting the soap and it’s fans. In 2013 Y&R lost some of their best actor/actresses Michelle Stafford, Billy Miller and Michael Muhney – all said to have had rocky relationships with JFP.

JFP buddy Chuck Pratt Jr. came in as new Headwriter also taking a spot as Co-Executive Producer – he could not contain himself from bragging to anyone who would listen in interview after interview that he would turn this show around, that he was qualified and knew what the people wanted. He said he knew what the show needed. What is very obvious to anyone who watches and loves The Young and the Restless is that Pratt seems to be all hype and little substance. He puts out these great soap promos promising excitement, adventure, suspense and danger – “tune in, you don’t want to miss it!!”

CDL has come to the realization when the promos come out Y&R tends to in fact follow up with a dead week – it is pretty pathetic when the promo is more fun to watch than that week of Soap. Case in point: The Valentine’s Day promo showed a plane crash in a blizzard with people freaking out, bloody faces bloody hands, lifeless bodies under rubble – we saw a roof caving in at The Underground! The promo says and we quote: “In an instant everything changes forever and someone won’t make it out ALIVE.” Then the firework was lit but it was a dud, no one died and none of us were on the edge of our seats at all wondering what would happen next – the one thing most of the fans had in common was that we were all sick of seeing Nikki (Melody Thomas Scott) and Phyllis (Gina Tognoni) with matted hair and filthy faces – proving that more is not always better – in this case dirt and ratted big hair.

The next EXCITING promo is this week’s – “The killer is revealed – you won’t believe what happens” Great clips and colorful too but that is about all any of it is. On the Aug 12 episode we see Marco Anicelli (Peter Bergman) and Bunny cop Detective Harding (Chris McKenna) meeting up at the Abbott cabin, the scene of the Scooby Doo Murder Mystery. CDL predicted the killer was Marco back in April and it seems that Pratt’s “twist” that he was bragging about was Det Harding, someone he threw in there to throw viewers off but that clearly did not work because CDL called that on the first shot when the Cabin Killer mystery (if you want to call it a mystery ) started back in February.

If this Cartoon Scooby Doo mystery is Pratt’s idea of excitement then he needs to get out more and watch real writers at work because this storyline is worse than a cartoon and it has insulted the intelligence of Y&R viewers! Pratt has villainized Victor Newman (Eric Braeden) to a point where he cannot be redeemed and we will just have to overlook all of Victor’s dastardly deeds. Victor has single-handily started the roller coaster all of evil and death that GC residents have suffered and will continue to suffer. Victor brought the sociopathic murdering drug lord Marco right into the heart of the lives of those whom he lived amongst without a qualm – and on August 12 The Moustache has the gall to say that he is sorry if Phyllis has suffered as a consequence – seriously – did someone actually write those lines?

We saw Marco for the first time on Valentine’s Day when he basically raped Kelly Andrews (Cady McClain) in the storage room closet at The Underground. Pratt has written Y&R so that Phyllis has repeatedly been raped by Marco for months and now she is suffering the consequences of this horrible revelation. Note: Pratt wanted to have Avery Clark’s character raped, beaten and killed… until the actress herself told TPTB that the character deserved more dignity and they ultimately changed the plot to a very anticlimactic exit for Jessica Collins. Victor has put every person close to him in danger – almost killing Jack Abbott (Peter Bergman) several times – first in a boat explosion, second with a bullet to Jack’s gut. Victor set up the “suicide” of Kelly Andrews and then in the end she ended up dying a bloody death all thanks to Victor – Victor may not have murdered her physically but he is to blame for where she ended up and her being killed.

Pratt seems to think Y&R fans are easily manipulated if not downright stupid – Pratt has Victor now becoming “buddies” with Phyllis and Jack with Phyllis actually asking Victor if he was going to apologize for the hell he just put her through by sleeping with the drug lord. Victor says he is sorry… really that’s it? He is sorry? Now Victor is being portrayed as superman – he is protecting all of his family and Jack’s family from the monster he brought in ? What is this Mr. Pratt?

Pratt has made it clear in multiple interviews that he does not care about what the fans on social media have to say – he knows what they want and need.  That such a paternalistic attitude is allowed to prevail in today’s Hollywood is both shocking and anachronistic. An overwhelming percentage of Y&R fans on social media are begging for this insulting story to end.

Fans had some hope when CBS asked them to fill out the on-line Neilson survey last month asking what they liked and what they wanted changed about the soap. Now fans are begging for some relief from the worst story in the history of Y&R. Adults do not want to watch the grown up version of the Scooby kids trying to break a lame mystery story that has been obviously thrown together just as the “confessional” story was. Y&R loyal viewers deserve more and they are demanding more – petitions have circulated demanding JFP and Chuck Pratt Jr. be fired. JFP’s contract is up this fall and if ratings continue to stay down she most likely will not be resigned – and that will not hurt the majority of the fan’s feelings.

What do you think CDL’ers, do you think Pratt and JFP insult the intelligence of the Y&R viewers? Were you disappointed that the hype of the “big reveal”of the Cabin Killer fell short of your expectations?

Please leave your thoughts and comments in the CDL comment’s below.