The Young and the Restless (Y&R) Spoilers: Adam and Victor Deal – Dr. Anderson Spies on Sage – Chelsea Sneaks Out of Town 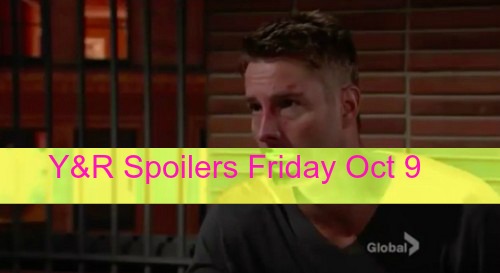 “The Young and the Restless” spoilers for Friday, October 9, tease that Victor (Eric Braeden) will have a proposal for Adam (Justin Hartley). Victor will suggest that Adam needs to stop the Paragon Project. In exchange, Victor will arrange Adam’s bail. Adam will turn down the offer and insist that he doesn’t care about Victor’s company. Victor will argue that Adam is abandoning his son and he should seriously consider making this deal.

Jack (Peter Bergman) and Abby (Melissa Ordway) will have a chat with Chelsea (Melissa Claire Egan) at her penthouse. They’ll sense that Chelsea hasn’t quite worked through everything with Adam and they’ll urge her to pay him a visit. Chelsea will show up at the police station and Adam will be apologetic. Adam will admit he’s made a lot mistakes, but he’ll ask if he can see Connor (Michael and Nolan Webb) once more. Chelsea will reply that Adam needs to be dead to both of them if they’re going to move on.

At the hospital, Victor will arrive to see his new grandson. Victor’s eyes will fill with tears as he tells Christian to fight like a Newman. Meanwhile, Abby will track down Stitch (Sean Carrigan) to tell him she’s sorry for getting so wrapped up in her work recently.

Stitch will ask Abby to get a cup of coffee so they can talk. Over at Fairview, Sharon (Sharon Case) will emerge from a deep sleep. Dr. Anderson (Elizabeth Bogush) will hint that it’s to be expected with her pregnancy. Patty (Stacy Haiduk) will look suspicious as she eavesdrops around the corner.

Dylan (Steve Burton) will show up to take Sharon home, but she’ll inform him that she’s not ready to go just yet. However, Dylan will be pleased that Sharon is doing well at Fairview. As Dylan leaves, Patty will warn him about the drugs Dr. Anderson is using on Sharon. Patty will insist that the dosage is too high and the baby could be at risk. Dylan will reply that Patty shouldn’t worry. Dr. Anderson knows what she’s doing.

Back at the hospital, Nick (Joshua Morrow) will run into Dr. Anderson outside Sage’s (Kelly Sullivan) room. Dr. Anderson will say she’s there to check on Sage so she can give Sharon updates. Later, Nick and Sage will share a hug as Dr. Anderson spies in the distance.

Other “Young and the Restless” spoilers reveal that Devon (Bryton James) will agree to pay the ransom for Hilary (Mishael Morgan). After Dylan places the briefcase of cash in the bushes, he’ll wait for someone to pick it up. Dylan will try to stop the guy who grabs it, but he’ll manage to get away.

Devon will be bummed out by the news that Dylan couldn’t catch him. At the lake house, Gwen (Nadine Nicole) will hear a noise outside and wonder if someone’s there. Neil (Kristoff St. John) will suggest that it might be the same person who got the ransom earlier.

Chelsea will arrive back at her penthouse and prepare to leave town. It seems Chelsea wants to go somewhere and start a new life with Connor. Chelsea will hint to Connor that they can just sneak off and no one has to know. Meanwhile, Adam will finally realize he has no choice but to accept Victor’s offer.

Adam will call up Victor to let him know they have a deal. If Victor will help him see Connor one more time, Adam will stop the Paragon Project. Will Adam and Victor’s agreement work out like they want it to? Y&R rumors indicate that some surprises are in store. Stick with the CBS soap to see the drama that lies ahead for the Newmans.