The Young and the Restless (Y&R) Spoilers: Adam Proves Bravery at Halloween Gala Fire, Hero Risks All to Save Lives? 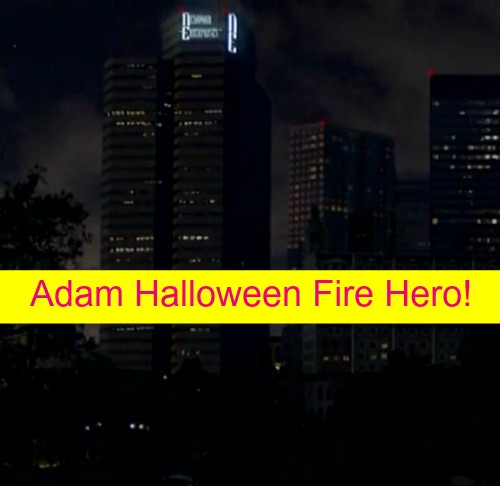 “The Young and the Restless” (Y&R) spoilers are in, and it looks like November sweeps will display an unlikely person being a hero while four characters die in the Newman Halloween Gala fire – one of which will be a front burner contract character. As CDL predicted a few weeks ago, there will be an explosion at a Halloween Newman gala.

The fire and eventual explosion forced Genoa City residents to face what is really important – saving their loved one lives. According to the spoilers released, one particularly unpopular Genoa City resident will risk everything to save as many people as he can.

For a while, it has been speculated that Adam Newman (Justin Hartley) would redeem himself by saving the town from a terrible tragedy. There has not been any leak as to who causes the fire, only that it will threaten to destroy the Newman Enterprises building during the Halloween Gala.

Victor (Eric Braeden) and Jack (Peter Bergman) must work together because if they don’t their wives, Phyllis (Gina Tognoni) and Nikki (Melody Thomas Scott) may not make it out alive.

Victor and Jack struggle to get along long enough to figure out a way to save their family members. Suddenly while they were trying to figure out a way out, but they get trapped in a closed-in area of the building. Adam stumbles upon Victor and Jack – trapped in the building while on his search for Chelsea (Melissa Claire Egan). Luckily for Jack and Victor, Adam comes in, risking everything to save them from a certain death in the blaze.

It was leaked a few weeks ago that Stitch (Sean Carrigan) was in the midst of contract negotiations which were not going anywhere and COULD be killed off the show. At the time, Soaps in Depth reported that Sean might either renew his contract or leave the show. The revelation sent fans into a panic worried about their favorite Genoa City sexy doctor. Is it possible that Stitch could be the contract character Y&R plans on killing off in the Halloween Gala disaster?

With Adam’s guilty verdict and sentence of ten years, followed by his being struck down by a van on a murder mission, how could he be the hero? Will something happen in the next week, October 26 – October 30, that releases him from his prison sentence? Will he even make it to the jail after being run down by an unknown driver?

November sweeps are here and the biggest spoiler of next week is that Adam will risk everything to save his family and friends from a blazing building and explosion. Fans are left scratching their heads with wonder. How can Adam save everyone if he is in prison or in a hospital bed? Don’t forget to come back for more “The Young and the Restless” spoilers, rumors, and November sweeps updates!