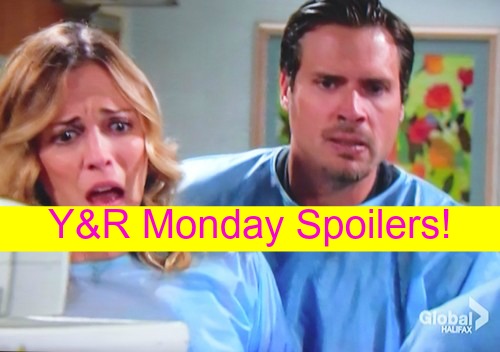 “The Young and the Restless” spoilers for Monday, October 26, tease that Adam (Justin Hartley) will be in bad shape near death after being struck down in the street as he headed to a prison van. Adam will be rushed to the hospital while chaos erupts at the scene. Victor (Eric Braeden) will believe Billy (Burgess Jenkins) is to blame for all of this since he stepped out just before the sentencing. It’s clear that Victor wants the person who hit Adam to pay.

Meanwhile, Ashley (Eileen Davidson) will approach Stitch (Sean Carrigan) and Abby (Melissa Ordway) at the athletic club. Ashley will announce that Adam was sentenced to 10 years, but it’ll become obvious that she’s interrupted something important.

Abby will try to shoo her mother away, but Stitch will suddenly get called to the hospital. Once Stitch departs, Abby will tell Ashley that he was about to propose. Ashley will seem a little skeptical, but later she’ll find the engagement ring in Abby’s champagne glass.

Other “Young and the Restless” spoilers say Christine (Laralee Bell) will be upset by everything that’s happened with Adam. It will remind Christine of when she was struck by a car and lost her baby. Michael (Christian LeBlanc) will stop by the police station to let Paul (Doug Davidson) know this wasn’t an accident. The driver didn’t try to stop and he or she aimed right at Adam. Later, a call will come in about the white car that was used in the incident. A witness saw it parked at a nearby motel. 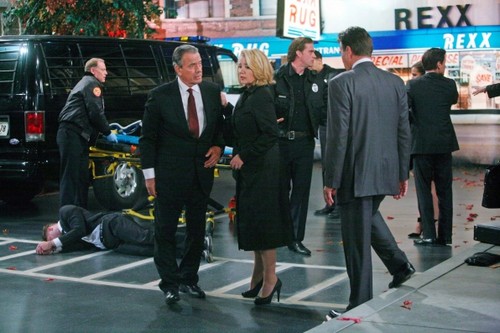 At Crimson Lights, Billy will indicate that he’s glad Victoria (Amelia Heinle) has been helping him handle his guilt. Jack (Peter Bergman) will arrive to give them the news of the hit and run. Abby will be notified as well. Later, they’ll all end up at the hospital as they wait for word on Adam. Nick (Joshua Morrow) and Sage (Kelly Sullivan) will be with Christian when they get updates on the ordeal.

Victor will still think Billy could be behind this, but Victoria will insist she was with him in the park. That won’t be good enough for Paul and he’ll want to check out Billy’s car. Billy will give Paul his keys and suggest that he has nothing to hide.

Everyone will try to comfort Chelsea (Melissa Claire Egan). Billy will say he hopes Adam pulls through and Sage will comment on the great love Adam has for his family. Abby will chime in that Stitch will take care of Adam. Stitch will state that Adam is being taken to surgery immediately. Chelsea will go to Adam and urge him to come back to her.

Nikki (Melody Thomas Scott) will realize that Victor has slipped out and she’ll grow concerned about what he might do. At Chelsea’s penthouse, Victor will pay the babysitter and say he’ll take over watching Connor (Gunner and Ryder Gadbois). When they’re alone, Victor will remind Connor that he means the world to his daddy. Victor will pray that Adam will get a chance to be there for his son.

Back at the hospital, Nick and Sage will hear Christian’s monitor going off. The nurse will inform them that Christian has stopped breathing. Nurses and doctors rush to try and save the infant!

Over at the athletic club, Jack will apologize to Billy for the way he handled the Adam situation. They’ll make peace with each other and try to let go of the past. Meanwhile, Adam will be trying to hold onto his life. Y&R rumors hint that Adam will pull through, but there’s surely more drama ahead. Stick with the CBS soap to see what the future holds for Adam.