The Young and the Restless (Y&R) Spoilers: Is Cane Ashby’s Evil Twin Caleb Atkinson Setting Up Bro As Ransom Blackmailer? 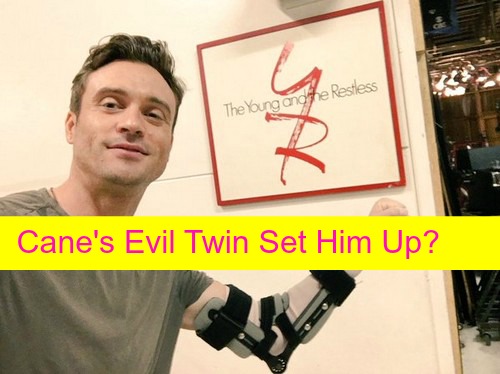 “The Young and the Restless” (Y&R) spoilers have been pointing towards Cane Ashby (Daniel Goddard) as the man who blackmailed Devon (Bryton James) and asked for ransom money to bring his wife Hilary (Mishael Morgan) home. At the end of the day – Cane is Colin’s son, and that kind of scheme has Ashby written all over it.

As the storyline unraveled, the evidence began mounting up against Cane, Y&R fans were certain he was the man in the black hoodie that went to pick up the ransom money. But, now “The Young And The Restless” rumors are teasing that Cane might be innocent … and his psychotic twin brother Caleb is wreaking havoc in Genoa City again.

“The Young And The Restless” spoilers tease that the Genoa City police will raid Cane and Lily’s (Christel Khalil) house – and find some damning evidence pointing to Cane Ashby as the culprit. And, when they do so they find the black sweatshirt that the man that blackmailed Devon for ransom money was wearing.

To add insult to injury, Dylan (Steve Burton) will check security camera footage and realize that the sweater definitely belonged to Cane – he can be seen clearly with it in his possession. And, there’s still that huge bag of money that Lily found in their closet…

The way “The Young And The Restless” spoilers are going, all signs are pointing to Cane Ashby pulling the wool over everybody’s eyes and turning out to be a total villain. But, Y&R fans aren’t buying – they are certain that there is way more to the story. “The Young And The Restless” rumors floating around the internet indicate that it might not be Cane in the security video at all … it could be his evil twin brother Caleb. Has he returned and stolen his brother’s life again?

For those Y&R fans who don’t remember, Cane has a twin named Caleb Atkinson – who killed their little sister Samantha, obviously also played by Daniel Goddard. Back in 2011 there was a complicated story on the CBS soap opera involving Caleb and Cane.

Technically, Caleb Atkinson is supposed to be dead – but we all know that nobody stays dead in soap operas … especially during November Sweeps, which are right around the corner. It is very possible that “The Young And The Restless” rumors are true and Caleb has returned from the dead and has stolen Cane’s life again. That would explain why Cane has been acting so out of character, and has been snapping at his wife and scheming up plans to get rich quick.

What do you guys think? Is Caleb Atkinson alive after all? Is he impersonating Cane, and if that is the case – where is poor Cane right now? Or is it as simple as it looks – and Cane has just crossed over to the dark side? Let us know what you think in the comments below and don’t forget to check CDL tomorrow for more “The Young And The Restless” spoilers and news!