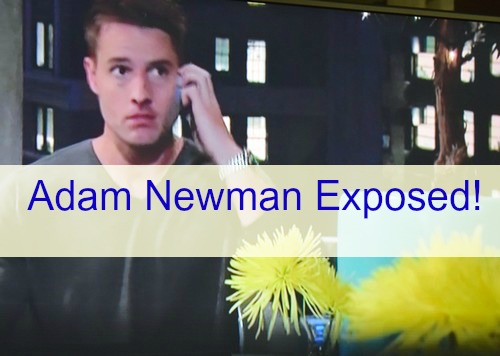 “The Young and the Restless” spoilers for Friday, October 2, tease that Gabriel’s (Justin Hartley) identity will finally be revealed. Adam (Justin Hartley) will insist that Chelsea (Melissa Claire Egan) can’t keep him away from Connor (Michael and Nolan Webb). Chelsea will reply that Gabriel Bingham has no rights, but she could easily tell everyone he’s Adam Newman.

Adam will admit that he’s full of regret for everything he’s done and he’ll suggest that he can make things right. Chelsea will imply that Adam will always put his own agenda before his family. After he leaves the penthouse, Adam will call Ian (Ray Wise) and order him to stop the Paragon Project immediately. It looks like it’s too little, too late.

Meanwhile, the virus will continue putting Newman assets up for grabs. Kyle (Lachlan Buchanan) will warn Billy (Burgess Jenkins) not to make any more purchases. They don’t want Victor (Eric Braeden) to come after them. Billy will laugh off Kyle’s fears and insist that he’s not afraid of the big bad Newman.

At Newman Enterprises, Victor will be furious about what’s happening to his company. Victoria (Amelia Heinle) and Abby (Melissa Ordway) will learn that Billy is buying up whatever he wants. Abby will mention how Ashley (Eileen Davidson) wouldn’t approve and Victoria will suggest that she could reason with Billy. They’ll argue that Ian is the one they need to be focused on. Victor will snap back that the Abbotts are to blame as well.

Jack (Peter Bergman) will head over to see Billy, who says he’s sticking it to Victor by purchasing some useful assets for Jabot. It seems Jack won’t have much luck getting through to Billy. Jack will show up in Victor’s office and ask Victoria to talk Billy down.

At the park, Phyllis (Gina Tognoni) will demand answers from Ian about the Paragon Project. Ian will admit that Victor hates his partner more than anyone. After failing to engage Phyllis in a guessing game, Ian will blurt out that Adam Newman is alive and he’s been running the show. Later, Paul (Doug Davidson) will arrest Ian and declare that he’s going to a maximum security prison.

Just as Victoria is trying to talk Billy out of making dangerous business decisions, Chelsea will arrive with huge news. Chelsea will tell Billy that Adam survived the car crash and has been posing as Gabriel Bingham. Back with Jack and Victor, Phyllis will burst in and give them updates on her conversation with Ian. Phyllis will admit it sounds crazy, but Adam isn’t dead. It’s clear that word spreads fast in Genoa City.

Other “Young and the Restless” spoilers indicate that there’s something fishy going on at Fairview. Sharon’s (Sharon Case) doctor will claim she needs to do some blood work to see if Sharon’s absorbing her medication. Of course, the secret goal of this is to determine if Sharon is really pregnant. Patty (Stacy Haiduk) will find Sharon and hint that she’s sorry she doubted her pregnancy since the blood test proved it!

Sharon will decide she’s ready to leave Fairview, but her doctor will insist her blood work shows she’s in the middle of a bipolar episode. The doctor will believe Sharon should stay and she’ll inject her with something to make her sleepy. Patty will come snooping around later and start rambling about baby names to a drowsy Sharon. The doctor will pop in and ask what Patty is doing. Y&R rumors say Patty is about to stir up trouble. Stick with the CBS soap to see what the future holds for Sharon.