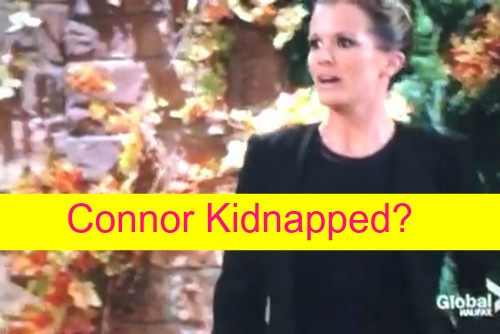 “The Young and the Restless” spoilers for Thursday, October 22, tease that Chelsea (Melissa Claire Egan) will be faced with quite a scare. The preview video shows Billy (Burgess Jenkins) and Chelsea in the park. Suddenly, Chelsea begins looking around and her heart sinks. Chelsea shouts out Connor’s (Michael and Nolan Webb) name, but he’s nowhere to be found.

It seems like poor Connor is always sick, missing or both. At least Billy will be there to help Chelsea search for her sweet boy. Chelsea encounters a new crisis almost daily in her drama-filled life. Has Chloe kidnapped the lad to wound Adam? Would the bereft mother stoop to a revenge kidnapping of innocent Connor?

As Chelsea tries to find her son, Noah (Robert Adamson) will try to locate Marisa’s (Sofia Pernas) daughter. Noah was hoping Victor (Eric Braeden) could be of service, but the price was too high. Since Noah isn’t willing to cut Marisa out of his life, he’ll turn to another source for assistance.

“The Young and the Restless” spoilers say Noah will ask Kevin (Greg Rikaart) if he can help him track down Marisa’s child. Kevin will be stunned that Noah is asking for this favor, but he shouldn’t be too surprised. In Genoa City, Kevin is the go-to guy for those who need to dig up info. If there’s a case to crack, Kevin can usually get right on it.

Meanwhile, Adam (Justin Hartley) will await his verdict. It looks like Adam has accepted his fate before he even hears the judge’s decision. In the preview clip, Adam tells Jack (Peter Bergman) that he killed a little girl and now it’s time to pay. There’s a good chance that Adam isn’t the one responsible for Delia’s (Sophie Pollono) death, but he’s already been convicted in the eyes of the public.

The question is: will the judge agree that Adam should be held responsible? Y&R rumors hint that we’ll get some intense scenes as the judge drops the bomb. Stick with “The Young and the Restless” for updates on the outcome of Adam’s trial.

So Y&R fans, what do you think about the news that Chelsea and Billy will panic when Connor goes missing? Where will Connor turn up? Will Kevin agree to help Noah find Marisa’s daughter? Are you hopeful that Adam can put his legal troubles behind him? Let us know what you think in the comments below and don’t forget to check CDL often for the latest “Young and the Restless” spoilers, rumors, updates and news.