‘The Young and the Restless’ Spoilers: Does Phyllis Attempt to Murder Kelly Over Jack or Is Kelly Setting Up Her Rival? 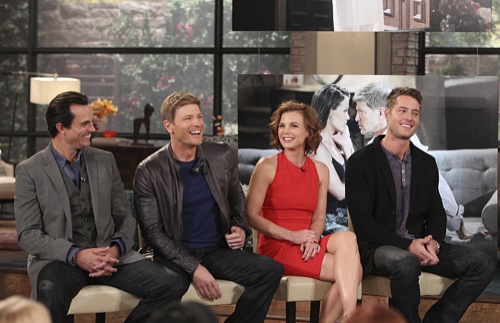 “The Young and the Restless” spoilers are spilling the low down on the Phyllis Newman and Kelly Andrews show down. For weeks we have been witnessing the back and forth arguments, physical confrontations and total demise between these two ladies over Jack Abbott. The Y&R rumors are releasing some news that leads us to believe, that Phyllis may have been behind the recent mystery of ‘Who ordered the roses from the florist’ debacle recently when a mix up of rooms, lead Phyllis to find a half naked Kelly and Jack together in a suite at the Genoa City Athletic Club.

The reference to Phyllis’s ‘blonde’ enemies and the discovery of a blonde wig in Phyllis’s purse, gives us reason to believe that she is trying to make a heart broken Kelly look guilty. Can Phyllis be that enraged with jealously that she is looking to make Kelly look crazy in Jack’s eyes, will Phyllis go far enough in her madness to murder Kelly? Or is she experiencing a chemical imbalance from the experimental treatments she received to help her come out of her year-long coma? On the other hand, some spoilers indicate that Kelly is really the evil one here and is setting up her rival Phyllis.

The doctors did warn Victor Newman months ago that the procedure could potentially harm Phyllis. Victor of course did not worry about this aspect of the treatment and actually pushed for more. If this latest “Young and the Restless” news is correct , what or who will be able to stop Phyllis before it’s too late?

This week on “The Young and the Restless,” Phyllis confronted Kelly while she was at the club having a cup of tea – hours later Kelly passed out and was rushed to the hospital where they informed her she had been poisoned. Everyone jumped to the conclusion that Phyllis poisoned her tea while they were talking, however it could also be argued that Kelly poisoned herself so that she could frame Phyllis and pin the crime on her. It’s pretty far-fetched, but also we never actually seen Phyllis slip her the poison.

The YR writers are definitely keeping us guessing on who, Kelly or Phyllis, is truly the demented one. Are you #TeamPhyllis or #TeamKelly? Let us know who you think has the real issues, did Kelly poison herself or did Phyllis do it? References to the movie “Fatal Attraction” and past story lines of Patti Williams are heating up the YR social media chat rooms. Detective Harding better hide his new litter of bunny rabbits! If Kelly is truly behind these deceptive actions, will her brother Dr. Ben be able to get his sister help before it’s too late? Remember to follow us on CDL for live updates and “The Young and the Restless” spoilers, rumors, and news everyday.