BY Stormy Elizabeth on December 17, 2015 | Comments: one comment
Related : General Hospital, Soap Opera, Spoiler, Television, The Young and the Restless 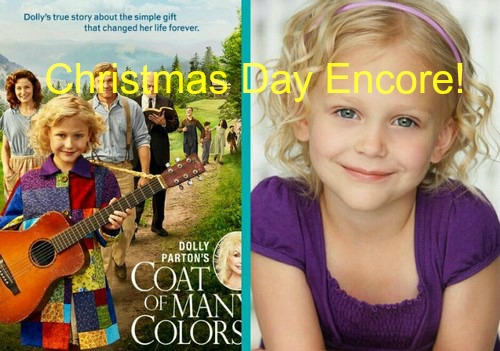 “The Young and the Restless” (Y&R) spoilers reveal that Alyvia Lind, portrayer of Faith Newman, has a huge hit on her hands with feel-good holiday movie “Dolly Parton’s Coat of Many Colors.” The movie also stars “General Hospital” (GH) Hannah Nordberg (ex-Josslyn Jacks).

The movie originally ran in primetime on NBC in early December, but fan reaction was so great that it will get an encore showing on Christmas Day at 9 pm EST, 8 pm CST, and 9 pm PST. While some critics found the movie a bit mushy, all acknowledge the stand-out work of Alyvia Lind and Hannah Nordberg.

It just goes to show the top acting talent that’s found on soaps. The Chronicle said, “Alyvia Alyn Lind truly stands out as a young Dolly. She’s a gifted actress with a wise-beyond-her-years sass and precociousness that earned Tatum O’Neal an Oscar years ago for Paper Moon.”

The review also said, “Lind steals the film… and Hannah Nordberg is great as Judy Ogle, the mountain girl who secretly watches out for Dolly and eventually becomes her best friend.” What’s also touching about the story is that Dolly and Judy have been friends since third grade and remain BFFs today.

If you don’t know the title song that inspired the movie, “Coat of Many Colors” is all about Dolly Parton growing up poor in the Appalachians and how her mother couldn’t afford to buy her a coat so she made her one from scraps of fabric left over and it became her coat of many colors.

The song and movie are also a testament to Dolly Parton’s deep Christian faith and relates to the biblical tale of Joseph who was given a fine coat of many colors from his father Jacob. The song debuted in 1971 and it reached number four on the country charts at the time.

And now the song has spawned a movie that is highlighting two of soapdom’s brightest young stars – Alyvia Lind from “The Young and The Restless” and Hannah Nordberg, a “General Hospital” alumnus. Alyvia Lind remains on contract at Y&R playing Faith Newman, daughter of Nick and Sharon Newman.

Hannah Nordberg saw her GH role recast after a SORA and she was replaced with Eden McCoy – but Nordberg is moving on to a slew of other projects. She has two movies in post-production now plus a pilot by the creator of Orange is the New Black.

If you want to check out Hannah Nordberg or Alyvia Lind in “Dolly Parton’s Coat of Many Colors” (see TRAILER below), tune in to NBC on Christmas Day at 9 pm Eastern and Pacific and 9 pm Central.

And be sure to come back to CDL often for tons more “The Young and The Restless” spoilers, “General Hospital” spoilers and all the soap news you need!