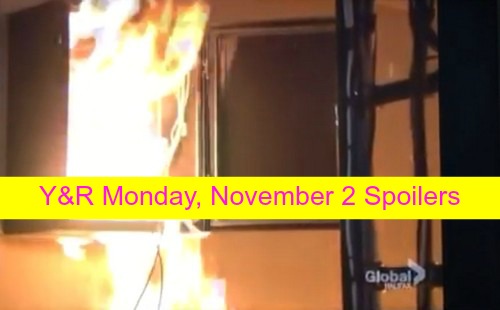 “The Young and the Restless” spoilers for Monday, November 2, tease that the tension will build at the Halloween gala. Someone in a devil mask and a red cape has been creeping around Newman Enterprises.

He or she is taking all the necessary steps to turn this party into a total disaster. The hooded figure already messed with the electrical wiring, which started the fire in Friday’s episode. Monday’s preview video shows the evil partygoer admiring his or her handiwork outside the door of the electrical room.

Meanwhile, Lily (Christel Khalil) and Cane (Daniel Goddard) will get in touch with each other over the phone. These two have been on the outs lately, but they might have hope for reconciliation now that the Hilary (Mishael Morgan) situation is clearing up. Still, there’s a possibility that Joe (Scott Elrod) could come between Cane and Lily once again.

In “The Young and the Restless” preview clip, Cane asks Lily if Joe is with her and she replies that he is. However, Lily is quick to mention that it’s not what Cane thinks. Of course, things could heat up once the flames increase. Sometimes people throw caution to the wind in the face of danger. Cane will let Lily know that he’s on his way, but he’d better hurry. Joe is the kind of guy who takes advantage of opportunities.

At the hospital, Christine (Laralee Bell) will tell Adam (Justin Hartley) that she spoke with the warden at Walworth. He’ll be expecting Adam by the end of the night. Nevertheless, it looks like Adam will take a slight detour. “The Young and the Restless” spoilers say Adam will be trapped among the fire and smoke.

We’ll have to see how Adam will get from point A to point B, but it’s clear that he’ll be front and center for the main storyline next week. Y&R rumors hint that we’re in for some jaw-dropping drama. Stick with the CBS soap for updates on Adam’s desperate fight for his life.

So Y&R fans, what do you think about the news that the fire is spreading? Are you nervous about losing some of your favorite characters in this disaster? Will Joe continue to come between Cane and Lily? Will Adam survive his upcoming ordeal? Let us know what you think in the comments below and don’t forget to check CDL often for the latest “Young and the Restless” spoilers, rumors, updates and news.