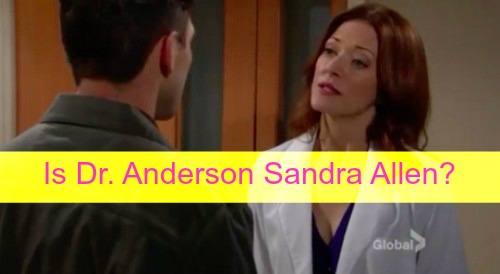 “The Young and the Restless” spoilers are in and there are some shocking surprises in store for fans of Y&R relating to Dr. Anderson!  Dr. Anderson (Elizabeth Bogush) has made it clear that she isn’t looking out for Sharon Newman’s (Sharon Case) best interest and has devious plans up her sleeve. For a while, it looked like she may be sincerely worried about Sharon’s mental health, but that was squashed when she drugged Sharon then ran into Nick Newman (Joshua Morrow) at the hospital.

On tomorrow’s episode Thursday, October 15, she convinces Sharon that it in her best interest not to see her family right now. Fans are confused about Dr. Anderson’s motives. Is it possible that Dr. Anderson could be none other than Sandra Allen?

It seems odd that Sharon would agree to go to Fairview after the heartache she experienced there when Faith was born. She was told by her doctor at the time that Faith died, but it wasn’t the truth. Adam (Justin Hartley) gave Sharon’s newborn to Ashley Abbott (Eileen Davidson) after he caused her to miscarry her baby months before.

Sharon trusted Adam and was completely shocked he was the one who masterminded Faith’s (Alyvia Alyn Lind) kidnapping. In the end, a distraught Ashley had to hand Faith over to Sharon – and grieve the loss of her baby she never knew she lost and the newborn baby girl.

Even so, Sharon made the tough call to admit herself back into Fairview. She decided this time she will get her life on track – once and for all. She needed time to figure out how she planned to tell Dylan (Steve Burton) that their child miscarried. She feared he wouldn’t recover from this loss. In all the anxiety of being there, and the nuisance of dealing with Patty Williams (Stacy Haiduk) she discovered she is miraculously pregnant again, or is she?

Dr. Anderson is a mysterious character and seemed at first to care about her patients. She revealed to Patty that she had blood work done to check Sharon’s levels- including pregnancy. She never confirmed with Patty the results, but she implied Sharon was pregnant. Many fans feel that Dr. Anderson has an ulterior motive, but what could it be?

Dr. Anderson gave Sharon a shot of a ‘new protocol’ that is she claimed was 100% safe for both Sharon and her baby. She told her it was a new treatment that has been extremely successful in treating bipolar disorder. Once she gave her the shot, she became sleepy and sedated right away. The high potency of the medicine worried Patty – she feels a familial connection to Sharon because she is Paul’s (Doug Davidson) sister.

When Dylan came to see Sharon, Patty cornered him. She told him she was worried about the drugs they were giving Sharon. “I have been in mental institution’s long enough to know when you are being given the high-octane drugs. I am worried about the baby- and her,” Patty told Dylan. He told her that Sharon seemed much better today- in fact, much better than she has in quite some time. Patty cautioned him that something isn’t right. She said, “I can feel it.” The question is, could Patty be right about Sharon’s new bipolar medication?

On October 15, Dylan arrives to Fairview to see Sharon. He is shocked to see Sharon so sedated. He questioned her doctor, and expressed concern that it isn’t safe for the baby to have such power medicines.

Dr. Anderson assured Dylan that the drugs are all completely safe; she assures him that these new medicines will help Sharon finally get control of her mental illness. She explains that it cannot be done in an outpatient setting; Sharon needed to stay inpatient to receive constant supervision.

Patty is extremely worried about Sharon and her baby. She decided she needed to get a note to her brother Paul; she knew he’d know what to do to help Sharon. She asked a nurse’s aide to get her brother a note, so he would know that Sharon needs help.

The orderly told Patty that she gave the note to Dr. Anderson. Patty finds herself locked up in her room- away from Sharon. Meanwhile, Dr. Anderson destroys the note Patty wrote and decided that she must keep Patty locked up because she will ruin her plan with fragile Sharon.

Dylan arrives to see his new nephew and his brother, Nick. He tells him that Sharon was not doing any better, yet. Nick tells him about Dr. Anderson running into him outside the NICU a few days ago. Nick explained that her behavior was kind of odd. Dylan found that to be very strange.

Dylan wanted to look into her history, something isn’t adding up with Dr. Anderson’s behavior. He promised to keep Nick up-to-date with any new information he discovered about the doctor and Sharon’s condition.

Meanwhile in Sharon’s Fairview room, the crazy Dr. Anderson brings Sharon a consent form to sign. She tells her that she doesn’t need to see any of her family. The only person she needs to see is her. Sharon barely can understand what she is saying to her because she gave her so much medication. Sharon signs the form like her doctor asked her to, and she is given more medication.

Clearly, the doctor is up to something – the big question is what her end game is with Sharon? It is looking more possible that Patty was brought on canvas to be the one who ‘saves’ Sharon from the evil Dr. Anderson.

For a few months, the show has teased that Sandra Lee could be returning for revenge against Sharon and Nick. At first, fans were sure that Sage could have been a relative or Sandra herself. It proved to be a dead end; Sage was just a woman who assisted Adam in reclaiming his life.

It is looking more and more likely that Dr. Anderson is really Sandra Allen, coming back to Genoa City for revenge against Nick and Sharon for destroying her life. Maybe she knew all along that Sharon watched her and Nick as she jumped in the pool at that night that changed her life, forever. She is clearly targeting them both, for some reason.

The question is, will Dylan figure it all out before it is too late. When you think about it- if she is that girl, she is probably pretty angry with the Newman’s and quite possibly may be out for sweet revenge at any cost! Don’t forget to check back later for more juicy “The Young and the Restless” spoilers, updates, and news!