The Young and the Restless (Y&R) Spoilers: Patty Kidnaps Sage’s Baby – Sharon Believes It’s Her Own! 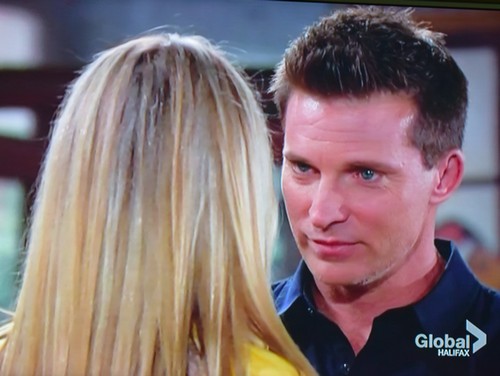 “The Young and the Restless” spoilers are in and it is going to be a bumpy ride with the final dash to Y&R November Sweeps. Sharon Newman (Sharon Case) has been off for quite some time. Sharon stopped taking her bipolar medication and lost her baby. She has been unable to conceive a replacement baby, and it is driving her crazy. Fans predicted that she would try to steal Sage’s baby and pass the child as her own, but it appears TPTB may be going a different avenue.

Sharon lost her baby a few weeks ago. Since the loss, she franticly tried to conceive another baby, only coming up empty handed. She confided in her daughter, Mariah (Camryn Grimes) that she lost her baby and couldn’t tell Dylan (Steve Burton). Sharon expressed concern that Dylan wouldn’t survive another child being taken from him. Mariah urged her to practice something Sharon hadn’t tried before – honesty. She told her mom, “Just tell Dylan. He loves you, and he can support you.” So far, Sharon refuses to reveal her secret to him.

Sharon will be admitted to Fairview this week. Sharon decided to commit herself because she is worried about her mental state. When in Fairview, she will run into Patty Williams (Stacy Haiduk), according to the rumors. It is speculated that Sharon will have a complete psychotic breakdown while in Fairview. She convinces not only Patty, but her doctor (Michael E. Knight) that she delivered a healthy baby, but Sage (Kelly Sullivan) took her child from her.

Meanwhile, Sage is admitted to Fairview for observation. She has been worried about her baby’s health and overcome with fear that someone (Victor) trying to steal her baby from her. Sage’s doctor believed that her problem was not a medical issue, but psychological. She urged Nick (Joshua Morrow) to schedule her for a consult, if for nothing else to help her face her fears.

Fans have felt for some time that the writers were setting the scene for a huge storyline between Sharon, Patty, and Sage. The only way they can pull it off is if they all end up at Fairview. The speculation is Sage will deliver her baby, and Sharon will convince her doctor and new friend Patty that Sage stole her baby from her. It will force Sage to prove that she is the child’s mother – and possibly have to establish who the real identity of her baby’s father.

The real culprit to the kidnapping will be Patty, according to the rumors. She will believe she is helping Sharon, unaware that the baby is probably Adam Newman’s (Justin Hartley) child. When she discovers that piece of information, there is no telling how Patty will react. Is it possible that Sharon can convince her doctor and Patty that Sage’s child is hers? Will Patty steal Sage’s baby to hand over to Sharon?

November sweeps are just around the corner, and it is looking to be action packed. Don’t forget to check back later for more juicy “Young and the Restless” spoilers, rumors, and updates!