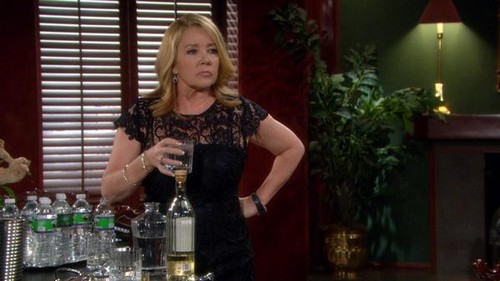 “The Young and the Restless” spoilers for Friday, January 30 tease some crazy drama and unexpected revelations in Genoa City. Rumors have been floating around for weeks now that Nikki Newman was going to get behind the wheel of a car while she was drunk and hurt someone she loves. Although she didn’t do that (yet), she did nearly drop her baby granddaughter on her head at her Christening because she was so drunk. According to “The Young and the Restless” spoilers for January 30th, Nikki’s family still has no idea she is drinking again – and is convinced that her MS is acting up. So, Nick (Joshua Morrow) pays his father Victor (Eric Braeden) a visit and tells him that all of the stress he is causing Nikki is hurting her health.

“The Young and the Restless” spoilers tease that Victor Newman is still apparently in a very charitable mood, on Thursday he decided to give Ashley Abbott (Eileen Davidson) back her love potion, and on Friday, January 30 he will continue to try and right some of his recent wrongs. Y&R spoilers reveal that Victor calls off the redevelopment project – and informs Nikki that he will not buy out Dylan’s coffee shop. Victor’s charity doesn’t stop there though; he also announces that he is going to sell Chancellor and gives Jill Abbott (Jess Walton) another opportunity to buy back Katherine’s company.

On other “The Young and the Restless” news, Kelly (Cady McClain) and Phyllis’s feud finally comes to a head – and Christine and Paul arrest Phyllis for attempted murder after they find video footage of a woman with red hair tampering with security cameras at the club the day that Kelly was poisoned. Also, Y&R spoilers tease that Sage and Adam Newman find themselves in some hot water when they meet with the executor of Constance’s estate – and he thinks they are faking their marriage. So, Adam (Justin Hartley) and Sage have no choice but to share an apartment together upstairs from Chelsea and Billy. Adam isn’t the only one getting a new roommate on January 30th, Victoria and Stitch (Sean Carrigan) decide to take their relationship to the next level and Stitch agrees to move in with her.

So Y&R fans, how much more damage will Nikki Newman do before someone finally figures out that she is drunker than skunk? Do you think Victor Newman is up to something, or is he really letting Dylan keep his shop? Do you think that Kelly framed Phyllis (Gina Tognoni) and could have been wearing a red wig, just like Phyllis wore a blond wig? Let us know what you think in the comments below and don’t forget to check CDL tomorrow for more “The Young and the Restless” spoilers and news.