BY Amanda Austin on January 29, 2015 | Comments: one comment
Related : Soap Opera, Spoiler, Television, The Young and the Restless 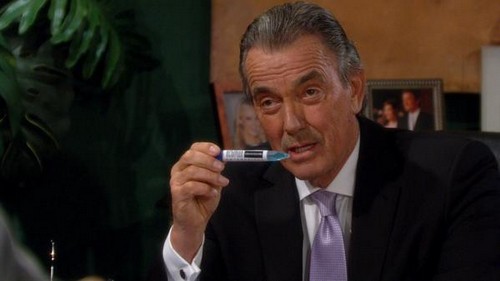 “The Young and the Restless” spoilers tease that the episode of the CBS soap airing on Thursday January 29 will be packed full of must-see drama and rumor has it Y&R fans will not want to miss a single second. Rumors have been floating around for quite a while that Nikki Newman’s drinking gets out of hand – and according to “The Young and the Restless” spoilers, that is exactly what happens on Thursday January 29.

It’s finally the big day of Baby Katie’s Christening, Billy Abbott (Burgess Jenkins) and Victoria Newman’s friends and families head to the big event in droves. And, to everyone’s surprise, even Victor Newman has the nerve to show his face. “The Young and the Restless” spoilers tease that Victor (Eric Braeden) had a change of heart and gave Jabot Cosmetics back their formula and all of the information he had confiscated – so Victoria allows her father to stay. According to Y&R spoilers, drunk Nikki (Melody Thomas Scott) passes out in a chair after the ceremony – and when they wake her up to take family photos, she nearly drops Baby Katie on her head!

In other “The Young and the Restless” news, Phyllis didn’t attend the Christening because she had some matters of her own to take care of. On Thursday’s episode of the CBS soap, Phyllis (Gina Tognoni) meets with Michael Baldwin (Christian LeBlanc) and reveals that Christine is coming after her and she needs a lawyer, Michael agrees to help her and warns that there could be serious consequences – even prison, if she did poison Kelly. According to Y&R spoilers, Phyllis packs a bag and appears to try and skip town after her chat with Michael. “The Young and the Restless” spoilers also tease that on Thursday’s episode fans can expect to see Avery wear a wire to her ex –husband Joe’s (Scott Elrod) hotel suite, however her plan backfires.

So Y&R fans, do you think that Nikki Newman’s family will finally realize that she has fallen off the wagon and desperately needs help? Or is nearly dropping the baby just the beginning, and not the means to the end? Do you think Victor Newman is up to something, would he really give back Jabot’s potion with no strings attached? Let us know what you think in the comments below and don’t forget to check CDL tomorrow for more “The Young and the Restless” spoilers and news.