The Young and the Restless (Y&R) Spoilers: Who Is Dr. Anderson – Kidnaps Christian Passes Off Sage’s Baby as Sharon’s? 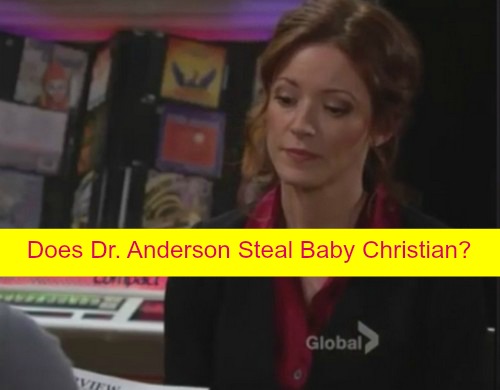 “The Young and the Restless” spoilers reveal that evil Dr. Anderson’s (Elizabeth Bogush) plan is finally starting to come into focus. At first, Dr. Anderson appeared to be harmless enough. Sharon (Sharon Case) trusted her seemingly kind and caring doctor.

Unfortunately, Sharon made a big mistake by heading back to Fairview. Longtime fans will remember that Faith (Alyvia Alyn Lind) was kidnapped from there shortly after she was born. Adam (Justin Hartley) swiped Faith and Sharon was told her baby girl had died. Obviously, Fairview has issues with supplying trustworthy employees.

Now Sharon could find herself on the other end of a baby snatching. On Wednesday’s episode of “The Young and the Restless,” Dr. Anderson calls the hospital and learns that Sage (Kelly Sullivan) has been released. The doctor then turns her attention to Nick (Joshua Morrow) and Sage’s baby.

Dr. Anderson claims she’s just been checking up on the situation to give Sharon peace of mind, but we all know there’s a plot in play. Ever since Sharon lost her baby, Y&R rumors have been swirling about a potential baby kidnapping. It looks like those rumors are coming true. Bottom line: Sage has a baby and Sharon needs one. Soap logic tells us that a little Christian will probably be scooped up and taken to Fairview.

Perhaps Dr. Anderson is in cahoots with someone at the hospital and Sage will be told that her precious preemie didn’t make it. Meanwhile, Sharon is having hallucinations about her baby bump and is refusing all visitors.

Sharon has been given so many drugs that she’ll believe whatever her doctor tells her. If Dr. Anderson eventually says congrats and hands her a baby boy, Sharon would easily believe it was her son. As for Dylan (Steve Burton), he won’t know that Sharon’s pregnancy hasn’t been progressing as normal since he’s been barred from seeing her.

This storyline seems to be moving along as expected. However, there are still questions about who Dr. Anderson is and what she’s up to. Some rumors suggest that Dr. Anderson may actually be Sandra Allen. Sandra was the teenage girl whose diving dreams were dashed when she accepted Nick’s dare and broke her neck at the Newman ranch.

Could Sandra be back for revenge? It’s certainly possible. Nick didn’t recognize Dr. Anderson when he saw her at the hospital, but she could’ve had plastic surgery to change her looks. We all know how Y&R loves those extreme makeovers.

In Sandra’s mind, Nick stole what she wanted most out of life. Sandra never had the chance to achieve her goal of becoming an Olympic diver. Maybe Sandra is hoping to cause Nick just as much heartbreak by stealing something that’s irreplaceable.

Of course, it’s also possible that Dr. Anderson is just a psycho who managed to falsify her credentials or a doc who’s suddenly gone off the deep end. Still, Dr. Anderson is clearly targeting Sharon. There has to be a connection of some sort and Nick could be the missing link. Stick with “The Young and the Restless” for updates on the next phase of Dr. Anderson’s scheme.

So Y&R fans, what do you think about the news that Dr. Anderson has her eye on little Christian? Does Dr. Anderson plan on stealing Christian for Sharon? Is Dr. Anderson actually Sandra Allen or could she be someone else? Is all of this really about Nick? Let us know what you think in the comments below and don’t forget to check CDL often for the latest “Young and the Restless” spoilers, rumors, updates and news.