The Young and the Restless Spoilers: Victor Does CPR On Jack As Underground Collapses, Learns Adam Alive – Gabriel Saves Billy 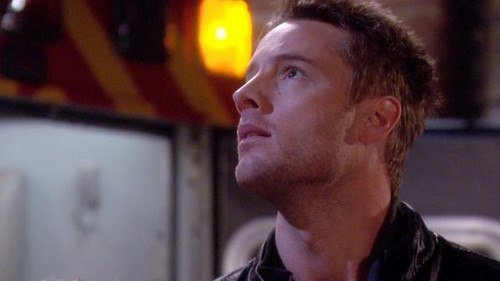 “The Young and the Restless” spoilers tease that the Thursday February 19 episode of the CBS soap will be another day of crazy drama in Genoa City as “Disaster Week” continues. So far this week on Y&R there has been a plane crash, a bar caving in, an apartment complex on fire, a car accident, and a murder at the Abbott cabin.

“The Young and the Restless” spoilers tease that on February 19 fans of the CBS soap can expect to see Adam Newman, aka Gabriel (Justin Hartley), head back inside the burning apartment complex and rescue his nemesis Billy Abbott. However, Adam is clearly conflicted and lets slip to Billy (Burgess Jenkins) that he should leave him for dead just like Billy did to him (in reference to the car accident they were in together) and then scoffs that he is “repaying his debt.” Once Billy and Adam are outside of the building the EMTs get to work on them, Billy is puzzled by Adam’s comments and tells Chelsea (Melissa Claire Egan) that Adam was rambling about “being even.” Meanwhile, an EMT patches up Adam and notices his tell-tale gun-shot scar.

In other “The Young and the Restless” news, on February 19 all hell will break loose at the Underground where the ceiling has just caved in on several Genoa City residents. Y&R spoilers tease that Avery is trapped with her wounded ex Joe Clark (Scott Elrod), and unaware if they will survive the building collapse Joe pours his heart out to Avery and professes his love for her. Their heartfelt moment is interrupted by Dylan (Steve Burton) who comes to rescue them, and Avery forgives him for punching her in the face.

“The Young and the Restless” spoilers tease that on the February 19 episode of the CBS soap Victor Newman will face a tough decision. While trapped in the Underground with Phyllis (Gina Tognoni) and Nikki, he discovers Jack Abbott’s (Peter Bergman) lifeless body. Victor Newman (Eric Braeden) shows a shred of compassion and performs CPR on Jack until he is breathing again. Jack is telling Victor he saved his life. Victor replies, “It would not be the first time.” Jack asks why he saved him. Victor replies, “Because the people I love, love you.” Jack tells Victor he has to tell him something and Victor replies, “Is this about Adam?” Spoilers tease that Jack is dazed and confused and says “I have to tell you something about Adam.” Victor demands to know what Jack has to tell him… then the episode ends. Could Jack spill Adam’s secret while he is half-dead and practically delerious?

So, Y&R fans, do you think that Jack’s near death experience will inspire Phyllis to forgive him and go home? Will Jack spill the beans about Adam Newman while they are trapped? Or will Billy or Chelsea figure out Gabriel’s true identity first? Do you think Avery cares about Joe Clark, or will she stick with Dylan? Let us know what you think in the comments below and don’t forget to check CDL tomorrow for more “The Young and the Restless” spoilers and news.