The Young and the Restless Spoilers: Are Mariah and Kevin The Cabin Killer’s Next Victims – Does Harding Stop Fake Jack?

BY Cheri Magistro on June 2, 2015 | Comments: one comment
Related : Soap Opera, Spoiler, Television, The Young and the Restless 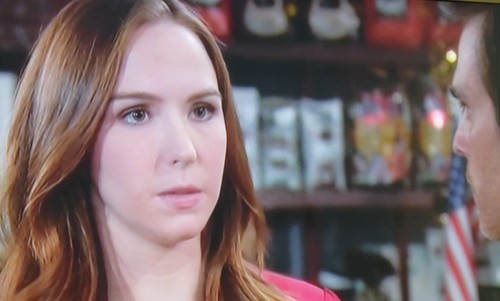 The Young and the Restless Spoilers are exploring yet another twist in the never ending storyline of “Who killed Austin Travers [Matthew Atkinson] and Courtney Sloan [Kelli Goss].” Most of Genoa City along with Chief Paul William [Doug Davidson] and the Genoa City Police Department, think that Tobias Grey [Jeffrey Christopher Todd], who was recently killed in a serve car accident, was the person responsible for killing both Austin and Courtney. Of course, Kevin Fisher [Greg Rikaart] is not buying into it. Naturally, neither is newly returned Detective Harding (Chris McKenna).

As Kevin continues to dig for more clues his life and the life of his live in side kick, Mariah Copeland [Camryn Grimes], are adversely affected and as they discover much more than just a killer living in their quaint town. According to the new Y&R rumors, Kevin and Mariah learn that Fack Jack Abbott [Peter Bergman] is not who he claims to be. But before anyone will believe them, Kevin and Mariah need to get hard evidence that back up their claims.

As we hear more exciting Young and the Restless spoilers that Marco Antocelli [Peter Bergman] is hot on their trail to stop them from exposing his true identity. The duo apparently are confronted by the Peruvian drug lord who threatens their lives. Will Kevin and Mariah’s quick thinking and smart wits be able to over come the fake Jack before another life or two is lost? More likely, will Det. Harding save the day? Of course we all know that at this point nobody but TPTB at Y&R know who the cabin killer really is – or if it’s only one person!

Meanwhile, the real Jack Abbott is tied up again sailing on a ship filled with illegal drugs with a bunch of drug smugglers who think he is indeed the famous drug lord Marco Antocelli. Jack decides his only shot at getting away from the drug thugs on the cargo ship, is to pretend he is Marco and go along with Marisa’s belief. Additional Y&R teasers and rumors find Jack trying to prove himself again to another woman who believes they are soul mates. Marisa [Sofia Pernas] is the one true love of Marco Antocelli and believes Jack is really him.

Jack needs Marisa’s cooperation to help him find his way back to Genoa City and his real life.Will Jack give up the Marco ruse and promise Marisa money and a better life in the United States if she can help him get back home. But will real Jack be able to convince Marisa he is really a multi millionaire who owns Jabot cosmetic company or is his only hope pretending to be Marco the murderous drug lord? Dear Jack will certainly have his work cut out for him with yet another woman who claims she loves him. Come back to CDL for more The Young and the Restless spoilers and updates!